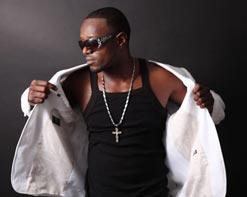 R&B singer Dre Of Code 3–born Andre Hawkins Jr.–has faced more than his fair share of struggles. Back in ’95, the Texas native was signed to Def Jam Records and on his way towards a promising music career, when he ended up in a prison cell. More bad luck followed when upon his release he was shot six times. While most folks in that situation would have given up and given in to darkness, Dre held on to his dreams, his passion for music, and his faith.   One listen to his voice, however, and you can understand why giving up wasn’t an option. His talent is simply too big to ignore. So he served his time, rejoined society, and got back to work on his career. Today, he plans to “bring love back into R&B music” and let those who are facing their own struggles know there is light at the end of the tunnel. With his powerful new single, Dre Of Code 3 is poised to reach his biggest audience yet, and HIP Video Promo is very proud to present the accompanying clip for “Struggle”.

As an introduction to the sound of Dre Of Code 3, “Struggle” couldn’t be a finer showcase. Hearkening back to the golden era of 90s R&B (back when the singer was the main attraction and not just a featured guest in the hook), Dre brings his smooth and soulful flavor to the forefront, demonstrating his vocal versatility on the song’s instantly memorable chorus as well as its two distinctly different (and equally impressive) verses. An autobiographical account of his life and a statement of purpose, “Struggle” features outstanding vocal production, a head-nodding beat, and a gospel-tinged progression that perfectly captures the track’s heavy vibe. With hooks to spare, Dre sings about surviving six bullets and the penitentiary, and lays out his policy on haters and fake friends. “Only God knows what I’ve been through” he sings. “You don’t feel me / I don’t feel you.” We’re willing to bet you’ll be feeling him by the track’s last note.

Directed by Michael Artis, the video for “Struggle” is a compelling, hi-def detour into Dre Of Code 3’s past. Seemingly a reenactment of the events which led to his shooting, the cinema-quality clip features Dre in a Texas suburb, sitting on a porch with boarded up windows and doors behind him. He flashes back to a time when he is sitting on that same porch with another man who seems to be a friend. But after some shady business involving a bag of drugs, we see Dre confront the other man and tell him to leave. The man begins to walk away calmly at first before suddenly drawing a gun from his pants and aiming it at Dre’s head. The effect is truly harrowing and makes for a video you won’t soon forget.

For more information on Dre Of Code 3 and his fantastic new single, please contact Andy Gesner at (732) 613-1779, or e-mail the HIP Video Promo staff at info@HIPVideoPromo.com .