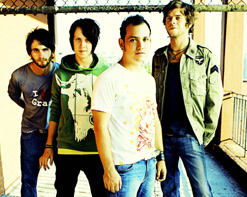 A very chilly greetings to everyone in the music video world, it’s Andy Gesner and the staff from HIP Video Promo, bringing you a clip from a band that promises to be the next big thing! As big fans of the Ben Folds Five – not to mention Bruce Springsteen and Bob Dylan – we’re happy to see the piano making a comeback in contemporary rock music. Sebastian Davin of Dropping Daylight plays the piano, and plays it well – but his band also rocks with a ferocity we’re accustomed to hearing from guitar-based bands. The Minneapolis quartet performs songs that are built around his muscular piano parts and the soaring upper register of Davin’s voice, but there’s enough distorted six-string, energetic bass, and pile-driver drums here to satisfy any punk-rocker. Over the past two years, Dropping Daylight have proved that themselves: they’ve shared bills with modern rock favorites like Breaking Benjamin, and stood shoulder to shoulder with the emo and skatepunk bands on the Vans Warped Tour.

Brace Yourself, their debut for Octone, shows off Dropping Daylight as a tuneful and committed – if idiosyncratic – true believers in the power of rock. Matching piano with heavy electric guitar can be a difficult thing to do, but this quartet has the knack for making their treble instruments blend. The piano parts hit with precision and distorted elegance, and the six-strings are positively scalding. Davin’s writing feels worldly and articulate, and even occasionally clever, but he doesn’t overwhelm the listener with erudition or association. He’s got salient points to make about the nature of modern romance and the state of the world, and he expresses himself in language that’s simultaneously artful and direct.

“Tell Me”, the lead single from Brace Yourself, is an expression of frustration and powerlessness: who, in the past few years, has not felt like grabbing the reins of government, or at least attempting to exercise some influence over those who are steering the ship of state? Davin sings for everybody wondering what steps to take to make their dissent clear, and who have felt ignored or taken advantage of by our political leaders. His singing on the chorus is an anguished wail, and he’s supported by Dropping Daylight at their most furious. See-saw piano parts frame a powerful, minor-key melody (and one with a gigantic payoff when it hits the release), and stormy guitar echoes the singer’s vexation.

The video for “Tell Me” is a further expression of discontent. Dropping Daylight plays inside a grim-looking warehouse, surrounded on all sides by television screens. As Sebastian Davin hovers over his electric piano and sings up at the camera, the monitors flash images from the news: scenes of combat, flooding after hurricanes, innocents running from armed men. Then, halfway through the clip, the footage changes, and we’re no longer looking at global events; instead, we’re treated to a parade of shots from reality television programs, gossip sheets, and the popular press. The televisions switch rapidly from scene to scene, and the restless camera captures and rebroadcasts details – they flash before us like subliminal advertising, reinforcing the connection between scandal, salesmanship, and violence. A production assistant sets up what appear to be two additional screens in front of the band. But then they switch on, and the quartet is bathed in studio light. It turns out that they, too, are on a TV set, and their producers are jamming the airwaves with their images; soon, they’re broadcast into the living rooms of those enthralled by mainstream entertainment. They’ve broken through, pirated a signal and seized the initiative; now, they’ve got the podium, and a desperate desire to get their message across.

We’d like to offer our thanks to Civia Caroline and all of the awesome folks at Octone Records for all of their hard work helping us bring you this incredible new clip. You can currently catch Dropping Daylight on the Sno-Core Tour, so if you’d like to catch up with them for an video interview, we’re here to set you up. Also, we have a plethora of Brace Yourself on hand for all of you on-air giveaway needs. If you need more info, call Andy Gesner at 732-613-1779 or e-mail us at info@HIPVideoPromo.com. You can also visit www.OctoneRecords.com to find out more about Dropping Daylight.