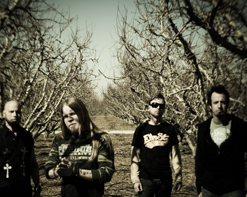 Hello rock lovers! It’s Andy Gesner and the staff from HIP Video Promo, excited to be able to bring you the latest clip from one of the most consistently-inspiring bands in heavy rock. Most musicians would be thrilled to have a song adopted as an anthem by a prominent athlete in a professional sport. For Drowning Pool, it’s become a regular occurrence. Champion wrestler Kevin Steen enters the ring to the brutal sounds of “Tear Away”. Skater Tony Hawk featured the bracing “Follow” on the soundtrack of his latest extreme-sports videogame. Martial artist Jet Li – certainly a professional-level athlete by anybody’s standard – used “Sinner” as the main theme for The One, his hit film. This year, Brad Lidge, Philadelphia’s intimidating closer, adopted the moving, powerful “Soldiers” as his intro. And let’s not forget how the countless times we’ve heard “Bodies” used as an extreme adrenaline booster. Drowning Pool’s tracks have blared over the loudspeakers at the biggest arenas and stadiums in the country, and sent capacity crowds into anticipatory delirium.

It’s not hard to understand why. A Drowning Pool song portends excitement and decisive action; this band means business. On album after album, they’ve delivered the adrenaline rush that’s central to the experience of athletics and heavy rock. Lately, they’ve developed a social conscience, too – or, to be more precise, they’ve articulated already-held values in unmistakably direct language. “Soldiers”, their first single from Full Circle, was a statement of concern for those who actually have to face the consequences of foreign intervention first-hand. Not a band to speak idly, Drowning Pool followed up the song with a national tour in support of the healthcare efforts of the Iraq and Afghanistan Veterans of America organization. Encouragingly, the song was a hit, reaching the Top 20 of the Mainstream Rock charts.

Although it culminates in a ferocious climax, the latest single from Full Circle showcases the band’s more meditative side. (Compared to everybody else out there, rest assured that it’s still pretty damned raw.) “37 Stitches” is a chronicle of a relationship in disarray, and Ryan McCombs tells the story with his typical rough-hewn empathy. The band doesn’t pull any punches either, drawing their inspiration from classic rock, alternative metal, and early-Nineties Alice In Chains-style semi-acoustic grunge. It’s this sort of deft musical fusion that has made Drowning Pool such a reliable concert draw, and kept the band on the road for the better part of the decade. But as much as they’re drawn to the highway, the members of Drowning Pool love their hometown of Dallas, and extended tours mean bittersweet partings. The clip for “37 Stitches” is a slice of life, and a peek behind the scenes at the homelives of the members of one of the biggest hard rock bands in the world. Shot on the day that Drowning Pool is leaving for another extended sojourn, we watch them packing their bags, kissing their girlfriends goodbye, getting that extra tattoo, and loading gear into a mammoth tour bus. Edited to resemble a home movie, the “37 Stitches” video is intimate, relaxed, and altogether winning. The musicians close the doors to their Dallas houses, meet in the parking lot, shake hands, and get ready for another killer tour.

We are stoked to be working with Sam Alpert and all of the folks at Eleven Seven Music yet again to champion “37 Stitches.” We have also been supplied with plenty of copies of Full Circle, so don’t hesitate to get in touch for all your on-air giveaway needs! If you need more info, call Andy Gesner at 732-613-1779 or e-mail us at info@HIPVideoPromo.com. You can also visitwww.elevenseven.net to find out more about Drowning Pool.