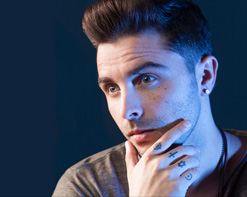 The road to redemption is paved with shadows of the past, but those who are able to see greatness at the end of this road shine brightly, even through the darkest shade. A man with a troubled youth, Duncan Morley is now on a righteous path and blue skies are ahead. With the help of The Boss himself, Rick Ross, and the team at Blue Sapphire Music Group who are working hard to make things happen, Morley is gearing up to make his worldwide debut with his first single, “Find You Now”, and set the entertainment business ablaze.

For Morley, growing up was a learning experience for both him and his parents. Raised in the Northeast city of Boston, MA, he was the kind of kid who was always causing trouble. He was an Indigo child that was always thinking outside the box…including in his schemes. After stealing a friend’s mom’s car and entering a high-speed chase with the authorities, his parents thought it was time for some corrective education.

Although most attempts to subdue the fire in his soul were null (he was sent to all kinds of alternative correctional facilities, ranging from wilderness programs to military school), one habit he picked up in the woods has stayed with him to this day: meditation. In his own words, “the more you do it, the brighter and brighter you become,” and brighter has he shined. Since picking up meditation, Morley studied studio recording in Los Angeles, where he uncovered his love for pop music and culture, as well as his passion to positively influence people around him. Like something out of a Hollywood movie, upon taking his first dip into the music scene, Morley has the opportunity to work with one of the biggest name in the music industry Rick Ross.

Ross, a Grammy-nominated rapper, entrepreneur and founder of Maybach Music Group, is determined to bring Morley’s talents to the forefront of pop culture. He invited this new artist to his mansion in Atlanta, GA where described him as having “the presence of a king.”

“Find You Now” came about as a result of this relationship, featuring The Boss on a verse and in the music video, which was shot at a gorgeous, palatial estate down in Miami, FL. The song holds a deep meaning beneath the surface. Externally about a lost love, Morley’s wordplay hints at a spiritual backbone searching for mindfulness in the present moment.

You don’t get a second chance to make a first impression, and Duncan Morley has put his best foot forward in his introduction to the world with the “Find You Now” ft. Rick Ross music video. We’re thrilled to be partnering with Blue Sapphire Music Group to promote the Duncan Morley “Find You Now” ft. Rock Ross video, so please don’t be shy about getting in touch to let us know what we can do to get it into your programming! Rest assured we’ll have plenty of outstanding Duncan Morley merch to set up online/on-air contests and giveaways throughout the campaign. Don’t hesitate to let us know what we can do on our end to make that happen. Please contact Andy Gesner and the HIP Video Promo team at  (732)-613-1779, email us info@HIPVideoPromo.com. You can also visit www.DuncanMorley.com and www.BlueSapphireMusic.com for more info on Duncan Morley.