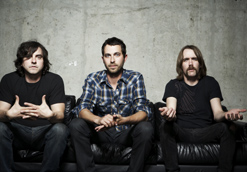 Hello music video friends and colleagues! It’s Andy Gesner and the esteemed staff from HIP Video Promo, here with a pair of clips from the estimable Eastern Conference Champions. The Pennsylvania trio has always been generous; today, they’re not only sharing the video for their latest single “The Box”, but they’ve also appended the remarkable spot for “Single Sedative”. Like the band’s music, both clips are eerie, playful, inventive, and blackly humorous. Plainspoken, direct, gutsy indie rock is their métier – and it’s made them a band to watch for 2008.

After shaking hands with the indie underground on the sterlingSouthampton Collection EP, the trio returned to the studio with landmark producer Owen Morris (Oasis, Ash, The Verve) to cut their debut full-length. On Ameritown, the Eastern Conference Champions fulfill the promise of their debut EP and add new dimensions to their already-elastic sound. In frontman Josh Ostrander, ECC possesses one of the most distinctive singers in indie music: a wailer with an emotionally-evocative scrawl of a voice. His bandmates support him with crisp, lacerating, occasionally twisted performances, and bravely follow him down some dark alleys of the soul.

While enthusiasm about Ameritown continues to build, Eastern Conference Champions’s debut has already been warmly received by critics. David Jeffers of the All-Music Guide praises the band’s “wonderfully vibrant brand of cabaret pop”. Theatrical they can be, no doubt, but on a song like the strange and bracing album opener “The Box”, the group’s sound is more psychoactive than cinematic. “Single Sedative”, on the other hand, is a wild, Cobain-like rocker, indicative of the kind of heat this combo can bring in performance. Eastern Conference Champions have always showcased their sardonic side in their videos: the Zelig-style clip for “Noel”, available on the band’s website, slips the images of the three bandmembers onto classic album sleeves. Directed by Elliot Jokelson (TV On The Radio, Pinback), the video for “The Box” is similarly sharp-witted (our friends at MTV2 have already jumped all over it). But although it’s funny in places, this clip is no gag. It’s a troubling animated spot, drawn in muted colors and set in a psychiatric ward. Patients queue up to get their medication, and sit, spellbound, in front of the television set; maintaining zonked-out order and decorum throughout. We catch a glimpse inside the head of one of the lunatics (a cartoon version of Ostrander, possibly?): not only does he see Eastern Conference Champions in performance, but also a disturbing chorus-line of psych-ward orderlies engaged in showy choreography. Other patients – eyes glazed – beat tambourines against their heads. Later, the band rides a mardi-gras float pulled by guards, as straight-jacketed inmates dance like dervishes. Back in the “real world”, we see that he’s freaking out – and the guards have noticed. He’s disrupted the enforced calm and sedation of the ward, and the orderlies have noticed. Bound and remote, he is led off to the electroshock center.

Not content with that powerful statement alone, the Eastern Conference Champions have also appended the engaging clip for “Single Sedative” to this reel. Using kids’ toys (and a very cooperative pet), the band turns a typical apartment’s living-room into a scene for a mock romance. The main character is a bearded action figure; he courts a Barbie-like doll, but she won’t have anything to do with him as long as he’s busy hunting the cat. The members of Eastern Conference Champions tape their faces onto toys, and make themselves active participants in this thimble-theatre melodrama. Finally, the hero gives in to his softer side, and makes peace with his girlfriend and the cute feline. “No cats were harmed in the making of this video”, ECC assures us at the end. Not to worry, guys – we know that behind all the bluster and barbs, you’re big-hearted.

Huge thanks to Lexi Ben-Meir and David Patton from Suretone Records for bringing us on board to once again be a part of the Eastern Conference Champions promotional team. They’ve been gracious enough to hook us up with some copies of Ameritown for your on-air giveaway needs, so drop us a line if you’d like some. They have also got some tour dates scheduled for the next few weeks, and we’d be happy to hook you up with a video interview when they come through your market. If you need more info call Andy Gesner at 732-613-1779, or email info@hipvideopromo.com. You can also visit www.Suretone.com to find out more about Eastern Conference Champions.