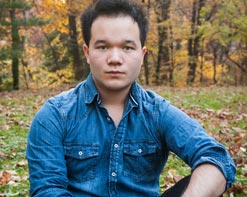 “Music is my passion, love, and one true escape from this world.” Perhaps this one quote sums up Eddy Faulkner better than anything we could write about him ourselves. But because we have such great admiration for him as well, we will do our best. This Arlington, VA singer, songwriter, and musician got his start in music at a very young age, beginning with a trumpet given to him by his parents in 2001. Fast forward to 2008 and many hours spent playing the video game Rock Band, and Eddy knew that he was ready to make the leap from classical music into the world of pop and rock. Today, we are proud to share with you the fruits of his labors and the dynamic new video for “I Won’t Give Up.”

After a short-lived tenure in a rock band with friends he struck out on his own as a solo artist and immediately threw himself out to the masses for a baptism by fire. An endless stream of original compositions and unique takes on cover songs. This constant stream of content helped Eddy build up a strong and dedicated fan base on Facebook, YouTube, and many other sites that number deep into the thousands. Some folks use their family or close friends as their sounding boards, but Eddy uses his fans and they reward him with a deep appreciation. His most recent single entitled “I Won’t Give Up” is perhaps the most perfectly crafted tune he has offered up yet. It’s a bold combination of soaring pop vocals, slick production techniques, and distorted guitars adding a perfect touch of rock.

The “I Won’t Give Up” video is a fun-filled and uplifting clip that follows a familiar narrative of a boy, played by Eddy, trying to attract the attention of a pretty young lady. As she happily strolls around town with her ear buds in she appears to be mostly indifferent to Eddy’s attempts to grab her attention. He’s not a natural on the basketball court, and he can’t quite lift much more than an empty dumb bell bar, but what he lacks in brawn he more than makes up for in brains. He crafts a custom mixtape and taking a page out of John Cusack’s playbook makes his way to her bedroom window, boombox in hand. We won’t give away the ending, but let’s just say anything can happen!

We’re very pumped to be working with Eddy Faulkner to bring you his most excellent new video for “I Won’t Give Up” and to introduce this talent to a brand new audience. Please contact Andy Gesner and the HIP Video Promo crew at (732)-613-1779, email us at info@HIPVideoPromo.com for more info on Eddy Faulkner.