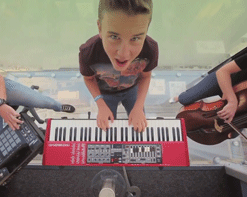 Edon is a fifteen-year-old student and singer/songwriter who has been playing piano since he was nine years old. His immense talent and impeccable vocal melodies capture the essence of this bright, young phenomenon and HIP Video Promo is pleased to introduce his official music video for the powerful rendition of Zedd’s smash hit “Clarity.”

After growing a fan base through his YouTube covers of Top 40 Songs, Edon recently completed a successful run on the NBC television show America’s Got Talent where he reached the semi-final round out of thousands of auditioning contestants. Sharon Osbourne stated that Edon reminds her of “a young Billy Joel.” He has even received favorable tweets from artists whose covers he’s performed, including Andy Grammer and Sara Bareilles, and was featured in a fan appreciation video created by The Plain White T’s.

He has performed at the JUF General Assembly, and recently has performed concerts across the country. The Chicago Sun-Times has said that, “the young crooner gains more fame and fans with each performance.” The Chicago Tribune writes that, Edon’s talent “as he sings and plays the piano often blows audiences away.” In the following clip, that is exactly what Edon does.

This haunting rendition of Zedd’s “Clarity” whisks viewers away. Between powerful vocals and an incredibly endearing piano and string variation, Edon’s masterpiece is a rendition of a popular upbeat song. Director Nick Brazinsky takes the song to a whole new level; the video was shot on The Ledge, which is the 103rd floor at the Chicago Skydeck of the Willis Tower (formerly the Sears Tower). Filled with enhancing details of a wondrous skyline, “Clarity” is a breathtaking clip that offers new heights for contemporary music.

On the Grind Management and Edon have teamed up to make lasting, monumental music. Edon’s talents and vocal melodies are a sure shot toward changing the contemporary music scene for the better. For more information on this exciting new artist, please contact Andy Gesner and the HIP Video Promo staff at (732)-613-1779 or email us at info@HIPVideoPromo.com.