Eldorado “The House Of The 7 Smokestacks” 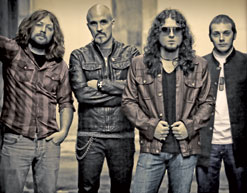 Hey, everybody, it’s Andy Gesner and the staff from HIP Video Promo, here with a new clip from a band that’s built audiences on both sides of the Atlantic. The “El Dorado” is a Spanish-language concept – the mythic city of gold that drove explorers and conquistadors into a frenzy of curiosity and speculation. But the El Dorado wasn’t to be found in the Europe: it was meant to be uncovered in the New World. Similarly, the rock band Eldorado is already a hit in their native Spain, but they’ve got their eyes set on the New World, too. Golden, their newest album, is available in Spanish and in English, and they’ll be returning to these shores later this year. The band is based in Madrid, and they’ve toured their homeland from coast to coast – but Golden was recorded in Toronto by the accomplished Richard Chycki, who has worked with (among others) Mick Jagger, Aerosmith, and Rush. Along with Chycki, the band has fashioned a sound fresh and immediate enough to win converts wherever Eldorado explores. Fans have dubbed this sound “new vintage rock”.

And what does Eldorado sound like? Bold, stormy, muscular, slightly mysterious hard rock, occasionally brooding, always intriguing, quietly progressive and unapologetically tough-minded. The musicianship onGolden is stunning, and the production is razor-sharp; fans of the rough stuff will find a new favorite here. Comparisons to Afghan Whigs and early Soundgarten are warranted, especially on the menacing “House Of The Seven Smokestacks”, their latest single. On “Smokestacks”, commanding frontman Jesus Trujillo wails over a bed of barbed six-string, pounding snare, and frenetic tambourine. And for those still wondering about the band’s place of origin, rest assured: Trujillo is every bit as articulate and powerful in English as he is en Español.

Alvaro Leon Rodriguez’s movie-like clip for “The House Of The Seven Smokestacks” speaks some internationally-recognized languages, too: primal horror, sex appeal, and fear of the unknown. Punk kitten Christina P. Linares stars as an enthusiastic and mischievous ingénue whose surplus energy portends an evil fate. She’s stuck on a long cross-country road trip with her boyfriend, and she’s coping with the boredom by being as playful – and sexually forward – as possible. She kisses him as he’s trying to concentrate on driving, slumps suggestively in the backseat, teases him with her bare foot; it’s all suggestive, but annoying, too. But there’s something else going on in the car, too – there’s a strong implication that they’re being followed, and when she’s not acting out, Linares stares out the backseat window in a combination of worry and intrigue. When the car breaks down by the side of the road, the trouble really starts: soon they find themselves in the middle of dark woods, pursued by off-camera spirits with all-too-real intentions. Cinematically constructed and beautifully shot, the “House Of The Seven Smokestacks” clip is, like the good thrillers it emulates, seriously sexy – and seriously scary.

We are very happy about the opportunity to work with Eldorado to bring you their first music video effort here in the US. We’re happy to hook you up with all things Eldorado, so don’t hesitate to be in touch! If you need more info, call Andy Gesner at 732-613-1779 or e-mail us at info@HIPVideoPromo.com . You can also visit www.HIPVideoPromo.com to find out more about Eldorado.