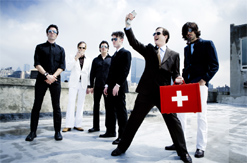 Greetings video aficionados! It’s Andy Gesner and the staff from HIP Video Promo, here with an amusing new clip from one of the most consistently funny bands in independent music. In the “Formula 409” video, the members of the Electric Six are abducted by men in alligator masks, loaded into a paddywagon, and driven to a laboratory for a wild bout of pseudo-scientific experimentation. For any other band, a clip like this would be a stroke of once-in-a-career inspiration – good for thousands upon thousands of views on YouTube and other video-sharing sites. For Electric Six, it’s just par for the course.

Consider the indelible images they’ve already given us. Just about everybody with a web connection has sneaked a peek or two (or two hundred) at the “Gay Bar” video. The gang of amorous, top-hatted Abraham Lincolns dressed in stereotypical homosexual gear – including thongs bedazzled with the stars and stripes – bumped and grinded their way onto lists of the best underground videos ever made. (There were even gratuitous shots of big trains disappearing inside big tunnels, in case you didn’t get the joke). Then there was the unforgettable clip for “Danger! High Voltage” – shots of a strangely grotesque pair of enthusiastic lovers, adorned with flashing, light-up breasts and crotches. In the “Radio Ga Ga” video, the Electric Six resurrected the ghost of Freddy Mercury and backed him with a band of poodles; the “I Buy The Drugs” clip found the band gleefully pillow-fighting with co-eds inside a sorority house. When last we saw these guys on YouTube, lead singer Dick Valentine was dressed as a centaur, decked out in Roman armor and swinging around a cheeseburger impaled on a sword. The song? The hilarious “Down At McDonnelzzz”, an infectious and madly catchy R&B send-up.

But for all the goofing around the bandmembers do, the Electric Six are deadly serious about their riffs, their incendiary shows, their not-altogether-absurd lyrics, and their huge, house-rocking choruses. In the United States, the Detroit sextet is one of the most reliable draws on the concert and festival circuit; over in the U.K., they’re even bigger than that – they’ve hit the Top Ten of the British charts several times. Anticipation for Flashy, their autumn ’08 release, has built on both sides of the Atlantic, and later this year, they’ll be returning to Britain in support of the new set.

“You can clean your kitchen, baby!”, Valentine howls on Flashy lead single “Formula 409”, and it may take you a moment to realize it’s not a metaphor. He and the band really are howling about cleansers (Mr. Clean is mentioned, too), and why not? The Electric Six can make anything at all sound anthemic. There’s plenty of footage of the band in action in Anthony Garth’s freewheeling clip for “Formula 409” – lightning-sparks shoot out of their guitars as they storm through the mad scientist’s laboratory. There’s also good reason to suspect that the musicians don’t exactly mind their abduction – the lab assistants are certainly easy on the eyes, and the captives even ask for extra doses of the medications they’re getting doped with. Still, they try to escape, emerging from a door in a wall of trees; they run down a country road, but the gators in business suits are right behind them. They’re seized once more, stuffed back in to the van, and dragged back to the torture chambers. Thoroughly brainwashed, the musicians are handed bottles of Formula 409, and sent back out to the city streets to mindlessly clean windows, fire hydrants, the shoes of passersby.

We are stoked to be working with Dave Heckman and Shannon Ludwig at Metropolis Records once again to bring you “Formula 409” from Electric Six. We have a healthy supply of the new record Flashy, so don’t hesitate to get in touch for all your on-air giveaway needs! Also, don’t forget to check out the band on tour from October through November, and reach out to us if you want to set up interviews or video IDs when Electric Six comes through your market! If you need more info, call Andy Gesner at 732-613-1779 or e-mail us at info@HIPVideoPromo.com . You can also visit www.Metropolis-Records.com orwww.ElectricSix.com to find out more about Electric Six.