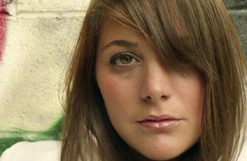 Howdy cherished programmers, it’s Andy Gesner and the HIP Video Promo staff in the glorious Garden State, here to spread the news about a golden-voiced singer based right here in our backyard. Elisa Girlando’s vocal performances leap off the tape at the listener: they’re commanding, bold, unashamedly bluesy, and indisputably magnetic. It’s the sort of voice that immediately presences a character: one that’s identifiable, familiar, charismatic, fully-formed. With those pipes, she’s made recordings of uncommon skill and subtlety — grown-up pop music with cross-generational appeal. The minute the North Jersey native begins to sing, things happen: she can hold an audience spellbound, and she’s scarcely less electrifying on record. This should come as no surprise considering her father is gold record producer and two time major label artist Phil Garland.

Credit though, in part, Elisa Girlando’s formal education as much as her pedigree. She’s a student of the blues as well as a practictioner, and that’s apparent from her respectful and intelligent treatment of her source material. Girlando made noise in 2008 with her stunning treatment of the standard “I’m A Woman” — a high-voltage version that established her as a gifted interpreter and a voice to follow. Out Of Truth, her band, consists of accomplished musicians, too: veteran producers, road-seasoned performers, disciples of jazz, rock, pop, and the blues. Astonishing, then, that Elisa Girlando is only twenty-five years old.

“Another Songbird”, the lead single from Rise Up, her full-length debut, showcases Girlondo’s sophistication: it’s a cut reminiscent of Diana Krall’s self-penned compositions on The Girl In The Other Room. Melancholy and aching, “Another Songbird” is also softly resilient, and the singer’s nuanced performance communicates hope amidst hardship. Out Of Truth plays the song with passion and precision, and Girlando’s poised piano guides the song forward with the delicacy and radiance of a lantern in the darkness. Tony Finno, who has worked on several major motion pictures, provided the compelling string arrangement.

On camera, Elisa Girlando is a natural: she’s comfortable in front of the lens, and wholly believable as the leading lady in her own private drama. But the clip for “Another Songbird” isn’t an act — Girlando’s performance brings the song’s narrator to life in vivid color and full detail. Director Al Carpenito, along with the able bodied and enthusiastic support of video producer Tricia Carrabba, captures Girlando in a sparsely-furnished suburban house; we know it’s winter, because the bare branches of the trees outside are reflected on the shiny top of the grand piano. These domestic scenes are ones of comfort: a big, fluffy bed, a coffee cup on a handsome kitchen table, a bathtub surrounded by lit candles. But the woman inhabiting this house isn’t comfortable at all – she’s waiting, painfully, for something that may never come. She shivers in her robe, fingers the rim of her steaming mug, and stares out the window with unspoken longing. Girlando inhabits the character with such ease that it’s impossible not to feel sympathy – to hope, against any and all odds, that her wishes and prayers are answered.

We are very pleased to be working with Dave Bollard and Phil Garland at Hit Play Records/Red Distribution to bring you this budding talent that is sure to make some big waves in the immediate future. Please don’t hesitate to be in touch if you need anything Elisa Girlando related, we are here to hook you up with whatever you need! If you need more info call Andy Gesner at 732-613-1779, or email info@HIPVideoPromo.com. You can also visit www.HitPlayLLC.com, or www.ElisaGirlando.com to find out more about Elisa Girlando.