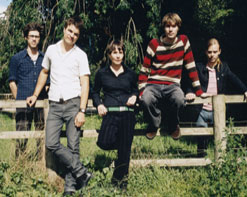 Spring is right around the corner and I’d like to extend a warm greeting to all my music video programming pals! It’s Andy Gesner and the staff from HIP Video Promo, here to spread the word about a terrific new clip from a band that is charming indiepop fans on both sides of the Atlantic. Envelopes are truly an international pop phenomenon: the members of the group sing in English, but they were raised in France and Sweden. Brille Records, their label, is a new British record company set up by Leo Silverman who also signed leftfield pop phenomenon’s The White Stripes and The Avalanches. Their music is influenced by urbane American art-pop, Brazilian psychedelia, Scottish indie-pop, and experimental Continental electro. Great melodies and energetic performances dissolve all borders – and Envelopes are poised to follow Air and Stereolab into the hearts of Stateside fans of left-of-the-dial pop music.

Though the group has only existed since 2002, Internet rock critics have already begun to rave. Drowned In Sound were ecstatic about the group, praising their summery sound and memorable songs: “they blinded me with their glittering pop-ness, gorgeous guitars dripping melody and smiles, shimmering with distortion and wry politeness, hop-skip-jumping from C86 to ’90s college rock to Right Now, and picking up the best parts of everything along the way.” In the U.K., the band’s debut received four stars out of five in leading broadsheet The Guardian; there, the reviewer praised the “synths that twitter like birds and guitars with a summer lilt that then crunch with distortion”. And enthusiasm for frontman Henrik Orrling’s expressive yelp and Audrey Pic’s sweet vocal counterpoint has been registered on webpages and blogs around the world.

Envelopes have named their initial release Demon, which only sounds sinister until you check your Swedish-to-English dictionary – it means “demo”. Yet somehow it’s appropriate: there’s something mischievous about this music. It may be pop, but even at its breeziest, there’s always an edge. “Sister In Love”, the lead single, buzzes and crackles restlessly; it’ll get stuck in your head for sure, but it’s no simple springtime ditty. Its exuberance borders on the manic.

Likewise, there’s something warmly sinister about the clip for “Sister In Love”. Directed by Envelopes themselves, the video juxtaposes two-dimensional pictures of the band (some colored in roughly with computer software) with odd still shots and images that are weird and unsettling. A hand continually offers a green apple to a horse, but the animal can’t eat it; a spider stalks menacingly in a jar, a grill burns out of control, knives stab at unidentified fruit, a cartoon plane breaks apart in flight. Primitive-looking videotape is spliced in between concert footage and manipulated shots of the band members; throughout, the clip achieves the freewheeling, associative character of collage art. It’s a wild ride, but it’s an occasionally disturbing one, too.

Most striking is the color footage of Envelopes playing in a grassy field. The five musicians wear flat, black and white masks of their faces – or, at least it’s what we think are their faces. They could easily be wearing each other’s faces, or the faces of people who aren’t even in the band. Frozen and unchanging, the grinning masks remain stationary as the group members bop along to the beat. Moreover, the black and white Cardboard cut-outs interrupt the bright color scheme of the video: they look like images from another reel, superimposed over the film. Envelopes plays with notions of representation and dimensionality elsewhere in the clip, too, blocking heads and faces in solid color, scrawling white lines over the shots, and drawing fangs in their open mouths. A barbed, playful video from a dangerously infectious band.

We are incredibly excited to be working with Envelopes and everyone at Brille Records to bring you this creative video from such an exceptional band. Envelopes are currently on tour and will be appearing throughout Europe in February and will be playing several dates in mid-March in the United States, including a performance at the SXSW music event in Austin, TX. We have plenty of copies of Demon to set up on-air giveaways, so please don’t hesitate to get in touch if this band intrigues you. For more info, call Andy Gesner at 732-613-1779 or e-mail us at info@HIPVideoPromo.com. You can also visit www.Envelopes.se for more info about Envelopes.