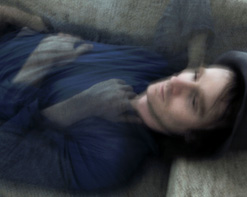 Some records sound dangerous, but are recorded in the safe confines of luxurious studios. This is not the case with Ethan Gold’s Songs From a Toxic Apartment, which was actually recorded in an apartment that was condemned by the health department and evacuated! It’s Andy Gesner and the HIP staff, here with an artist who truly suffered for his art and lived to tell the story. Join us with a walk through two portals of restlessness and redemption with “Why Don’t You Sleep” and “Poison.”

Ethan Gold wrote a two-page story at age four called “The Dreammaker,” about a tiny miner who chiseled into people’s heads at night and placed visions and nightmares inside. As a self-taught composer, singer, songwriter, and performer on all the rock instruments, Ethan has been doing with music what his little miner did ever since, creating cathartic, deeply affecting songs with landscapes of sound and melodies that clutch to heart, written while dreaming or in the altered state of insomnia. Some of you might be familiar with Gold’s work and not even know it. Elvis Perkins’ critically acclaimed album Ash Wednesday was produced and arranged entirely by Gold, who helped Elvis define his sound to establish him as one of the stars of the new folk movement. Ethan then proceeded to write his debut record, which began as demos for a heavy rock opera confronting child abuse, thrill violence, and war. But the more Gold recorded, the more he wrote, until a single idea had become a raging 75-song opus. Ethan suffered nightmares, hallucinations, headaches, and wheezing fits, while asbestos crumbled from his walls, gas leaks hospitalized his hall mates, pigeons roosted in the sills, and insect larvae crawled from his mattress, before the health department condemned the unit. He returned just to rescue his humble recording rig, and while inside for the last time, wearing a gas mask, a small plane crashed into an apartment precisely one block north of his building. From the safety of a new flat, Ethan coaxed the tender heart from inside the brutal opera to tell his own story, which became his acclaimed debut Songs From A Toxic Apartment.

“Why Don’t You Sleep” and “Poison” are the two leading tracks from the record that Pitchfork rated with high marks, praising Gold’s ability to filter in precious morsels of lo fi sounds into this work. Rock N Roll Experience called the album “the most interesting record I’ve listened to in the past 5 years.” The good review lineup doesn’t stop there, with praise coming in from numerous outlets like ASCAP Audio Portrait, Behind The Beat, Glide Magazine, Budget Fashionistas, In Tune, Revolt, Android Zoom, and many more. Gold has followed up on the buzzing critical reception by appearing on various radio stations including KUCI 88.9 FM, WLUR 91.5, WYBC and KBOO. “Why Don’t You Sleep” is the perfect example of why the album has been receiving so much attention – the song starts out as a quiet acoustic number and gradually builds up to the massive fully orchestrated explosion in the final chorus. The video is a perfect expression of the powerful song – as the instruments and vocals become more courageous, so does the boy who builds up the courage to run away. “Poison” on the other hand, is a computer animated extravaganza that will have Matrix fans up in arms, as massive robot tentacles start taking over the dark world of humanity. The song is a whirlwind of emotions as Gold asks for salvation while the devil stares him down and his relationships are damaged by sex.

Perseverance doesn’t even begin to describe the work that Ethan Gold has put into creating his masterpiece. Fortunately, all you have to do is sit back and enjoy the resulting spoils of his work! We are certain that you will find something very unique and comforting in Ethan’s dark work. We’ve got copies of his fantastic Songs From a Toxic Apartment for giveaways and contests, so please let us know if you’d like some sent your way. If you need more info, call Andy Gesner at 732-613-1779 or e-mail us at info@HIPVideoPromo.com. You can also visit www.EthanGold.com to find out more about Ethan Gold and any shows near you.