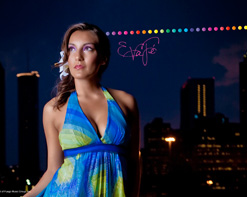 Look out programmers! We’ve got the latest and hottest new Latino-American pop star headed your way to shake things up. It’s Andy Gesner and the HIP crew, here with a racy new clip from EvaFe that will get you into a dancing frenzy. Inhale the sleek pop hit that is “Oxygen (Breathe).”

EvaFe is here to inject a little spice into the mainstream currents. With a flare resembling Selma Hayek and musical talent comparable to Selena, her distinctive and crisp voice is exactly what pop culture has been missing, and what her Latin heritage has been waiting for. She was discovered by Damon Redding (nephew of the legendary Otis Redding) in 2009 while performing at a Latin nightclub in the heart of Atlanta’s Buckhead district. Soon thereafter, EvaFe inked a recording contract with Fuego Music Group and quickly developed into the face and talent of Atlanta’s thriving international dance pop scene. EvaFe has honed her vocals under the direction of Jan Smith — the prominent celebrity vocal producer/coach, and is creating a huge buzz with her debut club smash “Oxygen”. EvaFe has already been noticed by several big Atlanta and internet outlets including the popular European urban magazine Yo! Raps, 305 Magazine, Real Atlanta, andFenuxe Magazine. She has also appeared on ArmadaFM radio and was recently crowned Miss Midtown Atlanta Latina! The singer has recently been performing around the club circuit, including the famed Mansions club, and has also performed at the Betsey Johnson Fashion Show. EvaFe recently graced national television with an appearance on NBC.

“Oxygen (Breathe)” is the debut single from EvaFe’s upcoming album Caloroso, which will be available later this year. The song features crazy catchy pop hooks over a club beat to get your feet-a-tappin’. EvaFe is not afraid to sing her heart out and doesn’t rely on inventive studio effects to make her sound spectacular, achieving a sound that’s very Euro in the manner of vocally versatile singers like Cascada. Though this track is built to do damage at the club, EvaFe is also in the process of releasing a Latino remix version of the song that will feature many staples of the culture, including a more traditional beat and organic instruments. The video breaks all the barriers to entry as it features the necessary components of a smash hit. The clip highlights the gorgeous songstress rocking an array of flattering outfits and hitting some VIP tables. As the chorus hits, EvaFe breaks into an infectious dance with glimmering lights all around her. This is a love song after all, and the video is interweaved with scenes of EvaFe’s dream guy as she sings out for his affection.

It fills us with glee to bring you this shiny and glamorous clip from EvaFe and Fuego Music Group. We’ve got tons of EvaFe stuff here at HIP Video Promo headquarters and would love to hook you up with some for contests and giveaways. Let us know if you’re interested in setting up an interview with EvaFe. If you need more info, call Andy Gesner at 732-613-1779 or e-mail us at info@HIPVideoPromo.com. You can also visit www.EvaFe.com to find out more about EvaFe.