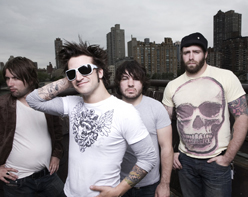 EVERY TIME I DIE

Greetings to all my esteemed music video programmer friends! It’s Andy Gesner and the staff at HIP Video Promo, asking you: remember when the Rubik’s Cube was the biggest phenomenon in America? Well, Every Time I Die sure does. The clip for “The New Black”, the scalding single from Gutter Phenomenon, prominently features a Rubik’s Cube – plus plenty of other cultural signifiers meant to evoke the birth of the music video age. They play it for laughs, for sure, and thumb their noses at the apparent anachronisms, but behind the parody is a secret respect for the era. Only true appreciators of the madness that was the early Eighties could have made a video so detailed, and so hilariously accurate.

Then again, you wouldn’t expect anything less uproarious from a band whose music the Village Voice has described as the sonic equivalent of a girl writhing on top of a Corvette. Part metalcore stompers, part rock and roll true believers, and all party animals, the members of Every Time I Die have vaulted to the top of indie rock nation’s long list of sleazy-but-oh-so-exciting countercultural heroes. They’ve sold out shows with the like-minded Dillinger Escape Plan, toured the nation onOzzfest 2004, and this summer the band takes another step towards commercial recognition and stardom with their summer long slot on the Warped Tour. Wherever they’ve gone, they’ve left jaws gaping and rooms spinning. It’s our great pleasure to be working with our new friends at Ferret Records to spread the word about this dangerously entertaining young act.

Gutter Phenomenon, the Buffalo quintet’s fourth album (re-released with 30 minutes of bonus footage taken from the upcoming S**t Happens DVD), brings the metal but smelts a few new alloys. For instance, they’ve clearly been listening to their old Allman Brothers albums, they’ve learned to boogie like Southern rockers. Their surprisingly supple rhythm section was raised on classic rock, and no matter how heavy the guitars get, they keep things swinging. Singer Keith Buckley’s voice breaks at all the right moments, throwing haymakers at the listener and frequently exploding into a delicious scream for extra emphasis. Recorded at Machine Studios in Hoboken, NJ, the industrial-strength Gutter Phenomenon really does feel like the sound of the streets.

Producer Machine, who has worked with the uncompromising Lamb Of God among others, knows how to generate a piledriver sound. On “The New Black”, he coaxes a blistering performance out of Every Time I Die – and Buckley, who has played the hellion before, has never sounded so convincingly delirious. It’s a come-on, an insult, a pouty, hands-on-hips invitation to get down, and the band sells every smoking minute of it. When the aptly-named Awesome Andy punctuates the second verse with a guitar solo, it slices through the track like a rapier.

Director Dan Rush has several tricks up his sleeve to give the clip for “The New Black” that mullet-headed Eighties feel. From time to time, he freezes the images of the bandmembers and displays them over colorful backgrounds. It’s meant to look like the titles to a period television show, and to drive the point home, he superimposes the names of the performers and the role they play in Every Time I Die. It’s a subtle way of extending the metaphor while letting the unconvinced know who these musicians are.

The action takes place in a suburban living room party, where Keith plays a binaca-spraying rock and roll ingénue. There he confronts his out-of-control bandmembers, party girls, and even a fat record company moneyman. All of the costuming and furniture is appropriately day-glo and tacky, and even the dances are magnificently dated. Appropriately, the girls are the Every Time I Die singer’s undoing – when he tries to match their dance steps, he’s exposed as a klutz with negligible star quality. His label chief rips up the contract, and the party empties out of the house, leaving Keith alone with a geeky male admirer. Ever generous, he shrugs and smiles.

It is our greatest pleasure to have the opportunity to team up with Carl Severson, Paul Conroy and everyone at Ferret Music promoting this must-see video. This tenacious label is located right here in central New Jersey, and we’ve always felt a true affinity for our fellow Garden State indie rockers fighting the good fight. We have been hooked up with enough copies ofGutter Phenomenon to go around for any and all of your on-air giveaway and contest needs. If you need more info call Andy Gesner at 732-613-1779, or email info@HIPVideoPromo.com.