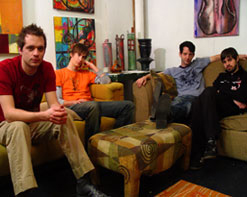 Hello to all my music video programming friends! It’s Andy Gesner and the staff from HIP Video Promo with another captivating band making waves in the indie rock world. Here at HIP we recognize that there’s a budding revolution happening in our field. New technologies have made it easier than ever for indie bands to make professional-quality videos, and the Internet has facilitated distribution and the dissemination of creative ideas through channels that we couldn’t have dreamed of five years ago. And we can think of no better illustration of that revolution than the amazing story of Extra Blue Kind and Fernanda Frick, the young director of the “Pinch, Blink, Stay Alive” video.

The animation in this clip is so good, and so subtly emotional, that you’d think it was turned out by a production house with scores of heavy-rotation clips in its portfolio. The images suit the music so perfectly that you’d figure the director was school-friends with the group, or at least a member of the same local independent music scene (Extra Blue Kind is perhaps the hottest indie band in Indiana – part of a cadre of Bloomington and Indianapolis-based rock groups). But actually, the “Pinch, Blink, Stay Alive” clip was assembled in Flash by a remote fan of the band’s music who lives in Santiago, Chile. And if that isn’t remarkable enough, there’s another kicker to this story: the director and animator, Fernanda Frick, is only fourteen years old.

Frick’s achievement has gotten her noticed. It’s won her feature articles in Spin, membership in the Flash Goddess Gallery, and positive attention on countless weblogs. The “Pinch, Blink, Stay Alive” clip took the young animator six months to do – in between homework assignments and extracurricular activities. She’d taught herself Flash animation only months before starting the project; learning techniques from manuals and tutorials. The “Pinch, Blink, Stay Alive” clip is, astonishingly, her first substantial piece of animation. (Her earliest experiment with the software, viewable on the Flash Goddess website, earned Frick a trip to the school psychologist; as a budding artist, she’s in good company there.)

It’s easy to see why the song appealed to her. Aching, dramatic, and gorgeous, evoking the best work of Archer Prewitt and Sea and Cake, “Pinch, Blink, Stay Alive” simply begs for a visual interpretation. Extra Blue Kind’s singer and songwriter P. David Handy has the kind of arresting vocal presence that makes everything he sings seem positively cinematic and quaking with stardust. Amplifier Magazine praised the band’s music as “cerebral, hungry, and melodically mesmerizing”, and lauded their lo-fi, sinewy, stripped-to-the-bone sound; “Pinch, Blink, Stay Alive”, the second single from the well-written The Tide And The Undertow, is the finest demonstration of the group’s power.

Frick felt that the song sounded aquatic, and hence she set her clip underwater. The protagonist is a little sea-person with wide eyes and an instantly identifiable face; his friends are a school of multicolored fishes, a blue tadpole, and a hermit crab. The hero chases the sun; he dreams of being able to sit on the beach and see the stars. Frick allows him to board a shaky air bubble and drift slowly and perilously toward the surface, watching his hopeful companions on the ocean floor. It’s a brilliant and powerful metaphor for leaving the comfort and security of home, and it’s all rendered in loving detail and gorgeous, washed-out colors. Anybody who has ever doubted the expressive power of Flash animation will be stupefied by the expressive range of this video.

We believe that the “Pinch, Blink, Stay Alive” will get you curious about Extra Blue Kind, so we’ve appended another clip on the reel: the video for “Make Yourself Useless”, the lead track on The Tide And The Undertow. A relatively traditional performance clip by Indiana video artist Matt Mays, the “Make Yourself Useless” video ought to dispel any lingering suspicions that Extra Blue Kind chose to foreground an animated clip because they aren’t telegenic. They’re a great looking indie band: young, hopeful, enthusiastic, and ready for a mass audience.

Here at HIP we are all about making sure we supply you with all of your Extra Blue Kind needs in a timely fashion. We have plenty of copies of The Tide And The Undertow for on-air giveaways and Extra Blue Kind will be on a nationwide tour throughout the spring. If you want to check them out live or set up a video interview when they visit your market, don’t hesitate to get in touch. If you need more info, call Andy Gesner at 732-613-1779 or e-mail us at info@HIPVideoPromo.com.