The Faint “I Disappear” 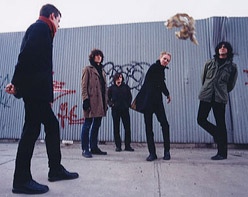 Hello to everyone out there in the music video world, it’s Andy Gesner and the staff from HIP Video Promo expressing enormous thanks to all of you who have been so supportive in 2004. Today we’re excited to bring you the latest clip from The Faint, and the first from their anxiously awaited follow-up to Danse Macabre. “I Disappear”, the lead single from Wet From Birth, bears all of the sonic hallmarks that have won the Omaha quintet renown: big beats, huge, overdriven bass, wild, squiggly synthesizer, sawtooth lead guitar, and brash, infectious vocals. The Faint has accompanied the single with a clip that amplifies its virtues – it’s a crazed explosion of color, a motion-picture spectroscope in which the kinetic energy of the band has turned the bandmembers a blinding white.

“White-hot” is a good description of the press and public reaction to the last two Faint albums. Danse Macabre and Blank Wave Arcadeseemed a very unique, personal and incisive spin on current trends in synth-pop and new wave revivalism. These albums connected with thousands of listeners across the country, many of whom were entranced by the group’s articulate writing about sex, cars, technology, and communication. Like their labelmates on Saddle Creek, The Faint are unafraid to be very smart: without sacrificing the immediacy of the backbeat, the group’s records are always theorized, intellectually stimulating, and cut with dry humor.

“I Disappear” cranks the Faint style into hyperdrive. The song opens with a grinding bass riff, joined by staccato synth, a splashy backbeat, and blurted vocals – and since this is the Faint, all the sounds are a pleasure to listen to. The spaces between verses are decorated with synthesizer swoops and dives, tape effects, and manic fills. After the bridge, as handclaps propel the song forward, a brittle digital kalimba takes a skeletal solo straight from the Split Enz playbook. Best of all is the electric guitar: scraping out chords high up on the neck, finding harmonies, squalling away during a breakdown, it decorates the corners of the song like flashing Christmas lights.

A song with the wigged-out new-wave energy of “I Disappear” requires a video just as antic, and The Faint have delivered. This is a performance clip, but it’s not even slightly verité – the colors are blurred, liquid, amplified, and they bleed into each other. In an effect that summons memories of the analog effects seen in early Eighties videos, the screen is subdivided into regions; they slide around restlessly, fractions of an image jostling for attention.

The setting is “The Orifice”, the band’s practice studio. At first glance, it looks like many other such spaces. But every object is invested with a brilliance, and the walls and ceiling are busy with hanging scarves, and crude, colorful paintings. The band, known for its intense performances (and seizure-inducing light shows), bounces around the room like five bright white comets; like animated, rocking overexposed negatives. The radiance can’t hide the vintage gear, however, and the Faint is sure to show the viewer gorgeous old analog synthesizers and cables looped out of the patch bay in a bold expression of electric chaos.

In order to generate even more excitement for this high profile video promotion, we are holding the “Saddle Creek Prize Pack” contest. Any programmer that adds The Faint “I Disappear” or Now It’s Overhead “Wait In A Line” videos during the month of September will be entered into a drawing to win a prize package including: a 12 pack of your favorite Saddle Creek releases, limited edition DJ-only promo 12” of “I Disappear”, buttons, autographed copies of Wet From Birth and Fall Back Open and the chance to meet the band when they come to New York in October during the CMJ/CVC Conference. The drawing will take place September 30th. If you need more info, call Andy Gesner at (732) 613-1779, or email info@HIPVideoPromo.com. You can alsowww.saddle-creek.com to find out more about The Faint.