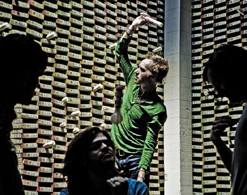 Hey, everybody, it’s Andy Gesner and the staff from HIP Video Promo, here to spread the news about a fantastic new clip from The Faint! The clip for “The Geeks Were Right” is as infectious and imaginative as anything from the heralded Blank Wave Arcade orDanse Macabre. Here’s a group that’s always been at their best when they’ve followed their instincts – they’re indie rock non-conformists, and their unconventionality has always been one of their most attractive qualities.

And for the first time, they’re calling all the shots. The Faint are now completely independent: the upcoming Fasciinatiion will be the first release August 5th on blank.wav, their own label. The group has already declared that Fasciinatiion is about predictions and the future, tabloid culture, the allure of what may never be and the loss of childhood innocence; we’re sure that description only scratches the album’s surface, since we know that the conceptual depth of every Faint album and Faint song reveals itself slowly, after repeated listens. .

Because the Faint understand (as did the best new wave artists) that primitive processing is often more affecting and psychedelic than high-budget effects, the band is a natural subject for guerrilla video. The memorable spot for “I Disappear” was one of the most visually-arresting of 2004; it was also a digitally-altered performance clip shot on an indie budget. The magnificently weird video for “The Geeks Were Right” is reminiscent of “I Disappear” – if anything, it’s even more primitive, colorful, and immediate. Once again, The Faint resurrect effects from the early stages of the video age, and push them to mind-bending extremes: floating orange grids, kaleidoscopic swirls of light, warped rainbow figures, contorted images that feel mirrored into infinity. Yet some of the most arresting shots are even simpler – the Faint guitarist playing in a black body-mask, or the head of a creepy bearded old man superimposed over that of the singer. It all unfolds in a twisted geometric innerspace, a world of pure idea and symbolism, haunting, chilling, evocative, traces of the human caught in the synthetic.

We would like to thank the folks at blank.wav for bringing us this stellar video. We have lots of copies of Fasciinatiion for your on-air giveaway needs, and The Faint will also be touring the US throughout the month of August – dates at the link below, so please let us know if you’d like to set up a video interview when they come to your market! If you need more info, call Andy Gesner at 732-613-1779 or e-mail us at info@HIPVideoPromo.com. You can also visit www.BlankWav.com to find out more about The Faint.

For info about The Faint’s previous video, “I Disappear”, click HERE