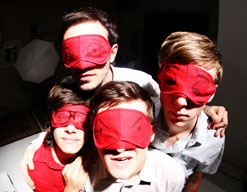 Howdy programming friends, it’s Andy Gesner and the staff from HIP Video Promo, here with a stellar clip from an electrifying young band that demands attention. The first thing you’ll notice are Derek Perry’s bass strings: alternately yellow and red, thick, colorful, and vibrating for the camera as they’re plucked. A typically striking image for a band as theatrical as Fake Problems, sure – but it only hints at the day-glo explosion to come. Mere seconds into the “Diamond Rings” clip, all the lights go out, and when they do, the technicolor monsters take over. Bones painted on the musicians’ clothes come to life under the blacklight, and hard-rocking skeletons fill the stage. Imagine an x-ray machine that renders its images in glow-in-the-dark acrylic, and you’ll get a sense of the macabre mayhem captured in the latest Fake Problems video.

These animated bones dance to the beat, play-fight, and even crowd the microphone and contribute backing vocals — which is unsurprising, since Fake Problems’s ingratiating brand of punk rock has been known to engender irresistible urges to sing along. “Diamond Rings”, in particular, just might be the poppiest and catchiest thing they’ve ever recorded. Chris Farren’s roughhouse vocals are captivating, immediate, and buzzsaw-sharp, and the band crashes through the track with a swagger rare among modern rock groups. But they’ve got good reason for their confidence: It’s Great To Be Alive, their latest set, is a courageous fusion of old-school punk, outlaw country, protest folk, ragged Americana, Springsteen-style roof-raising anthems, and, in the case of “Diamond Rings”, irresistible dance-rock. There’s nothing out there even remotely like it, and It’s Great To Be Alive has been recognized as one of the most ambitious — and satisfying — punk records of 2009. It’s a major aesthetic statement from a band on the rise; fun as hell to listen to, too.

Anybody who has ever seen Fake Problems in concert (and plenty have; they’ve toured the country with Against Me!, Anti-Flag, Murder By Death, and Riverboat Gamblers, to name just a few) can testify to the theatricality and intensity of their live set. “Dream Team”, their previous clip, caught the band in action at a house party; “Diamond Rings” demonstrates they can rock the netherworld just as convincingly. The skeleton versions of Fake Problems don’t mean anybody harm — they just want to perform their song. But there are more nefarious monsters lurking in these shadows, and they’re making it their business to harass a young couple who’ve happened to stumble onto the darkened set. The blacklight and the glow-in-the-dark paint affords the band some chances to get creative, and they seize their opportunities with both hands: in one arresting shot, a skull parts from the rest of its skeleton, and appears to roll along the floor away from its former body. There’s also a clever nod to old children’s television — Farren is silhouetted, but instead of words or speech bubbles, ghosts pour out of his mouth. Vivid color highlights each shot: the microphone is hot orange, the bandmembers’ bones are green, and an artificial skyline shines in the background as Fake Problems plays. It’s all a visual treat, and proof once again that you don’t need to break the bank to create memorable special effects: evocative, unforgettable footage is attainable on an indie budget.

Big thanks to the crew at Side One Dummy Records for bringing us the terrific clip and helping to continue to spread the good word about this awesome band. If you need more info, call Andy Gesner at 732-613-1779 or e-mail us at info@HIPVideoPromo.com. You can also visit www.SideOneDummy.com to find out more about Fake Problems.