Fields “Song For The Fields” 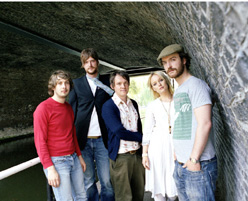 Greetings from the scorching east coast! It’s Andy Gesner and the staff from HIP Video Promo, back again with another terrific clip from a band just beginning to imprint its songs on the collective consciousness of indie rock listeners. Fields are true independents – their debut EP, 7 From The Village, will be released through Black Lab Recordings, their own imprint. But since their formation in ’05, they’ve managed to generate an international buzz that most major label bands can only dream about. And although “Song For The Fields” was remixed by Ewan Pearson of the Rapture, the British quintet has managed to capture a lush, powerful, and hypnotic sound on 7 From The Village without much outside help. Making music that is sonically detailed and richly immersive, Fields has swiftly become one of the UK’s best-loved and best-reviewed new bands. And when 7 From The Village gets its stateside release in September. They will be touring stateside then, so look out for them when they come to your area. They plan to play CMJ this year. It’s a safe bet that Fields will become one of the hippest names to drop on both sides of the Atlantic.

The acoustic-guitar framework of Nick Peill’s songs is always apparent, but Fields enriches their mixes with layers of radiant guitar, trippy synthesizer, and gorgeous vocal harmonies. The resulting tracks sound to our ears like the missing link between Pink Moon and Barrett-era Pink Floyd: pastoral, resonant, and always on the cusp of exploding. 7 From The Village build from a confessional whisper to a chaotic scream – the band’s remarkable expressive range has been one of their calling-cards. Fields has built a reputation as a sensational live act, gigging in the UK with Bloc Party, Mystery Jets, and The Spinto Band, touring across the British Isles, and performing powerful and often revelatory interpretations of the songs from 7 From The Village.

“Song For The Fields” is a terrific example – although not the only example – of the dark fire that Fields can generate. The song begins like dreamy Boards Of Canada, but soon pulls the listener into a dramatic and hallucinatory soundscape. Peill and Icelandic-born bandmate Thorunn Antonia both have acid wrinkles in their voices, and when they sing together, the effect is positively psychedelic.

Like many of the most challenging psych acts currently making records, Fields draws inspiration from the classic UK film The Wicker Man. The movie’s soundtrack has been an enormous influence on “weird folk” artists, pagans, and purveyors of dark whimsy, and its strange final scenes have cast long shadows across subsequent British cinema. The stunning animated clip for “Song From The Fields” stars an actual wicker man – an entire country field’s worth of them, in fact. These walking stick-figures have internalized their domination so completely that they’ve become the tools of their own trade: they’re miners of a sort, and their hands have become scythes and shovels. Under a darkened sky, they work together, digging holes. Finally, when the grooves in the earth are large enough, they plant themselves head-first, tipping their legs and arms up into the sky. Long and jagged, the new branches stretch toward the rising sun.

We’re ecstatic to be teaming with all of our new friends at Black Lab Recordings to bring you this incredible buzz clip from a band that is sure to be on the American radar in no time. The band will be making LIMITED US appearances in September, but if you are lucky enough to be in one of those areas, let us know and we’ll hook you up with an interview or video ID. We will have a plethora of copies on hand of7 From The Village for all of your on-air giveaway needs. If you need more info, call Andy Gesner at 732-613-1779 or e-mail us at info@HIPVideoPromo.com
. You can also visit www.blacklabrecords.com to find out more about Fields.