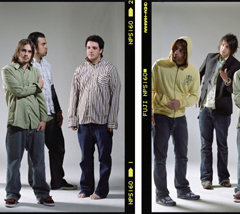 Hey everyone! It’s Andy and the staff from HIP Video Promo and love is in the air! We’re back to share with you yet another clip from our good friends Lisa Frank and Christian Taylor at Geffen Records! When Finch burst onto the scene in 2002 with the dynamic What It Is To Burn, fans of modern rock were thrilled – but a few of the more dogmatic members of the punk community wondered aloud about the group’s genre. Was this hardcore? Nu-metal? Pop-punk? Emo? The album had some of the thunderous bottom of the hardest rock groups, and some of the catchiest melodies this side of Blink-182. The group was also unafraid to play with expectation and arrangement, crafting songs with twists and turns while never sacrificing punk immediacy. What’s more, Finch showed they possessed something sadly rare among their poker-faced peers: a defiant sense of humor.

Now in the spring of 2005, the Temecula, CA quintet pushes all of the questions aside at once with the intoxicating and ambitious Say Hello To Sunshine. If the debut album owed much to the Deftones and radio-ready melodic emo, the follow-up brings the band out of the shadows of their influences. The new sound is still recognizably Finch, but it is bigger, rougher, bolder; the emotions are more intense, the colors more vivid. The group’s fondness for intricate soundscapes a la Radiohead and Mars Volta is evident here, but with an unsatiable hunger for hard rock edge and pummeling hooks.

That heavy-rock virtuosity is on display on “Bitemarks And Bloodstains”, the bracing lead single from Say Hello To Sunshine. The song rides in on a finely-wrought and precisely executed guitar weave – before plunging into the icy depths of a bone-rattling chorus. Singer Nate Barcalow barks out his tale of passion and betrayal over his bandmates’ hammering, and arrives at a nearly-incomprehensible (but oh so emotionally affecting) screamed release. It’s tough to decipher, but the word “blood” is definitely in there – and that’s really all you need to know.

In the vision of video director Michael Palmieri, the members of Finch are the only sane people in a world gone mad with anxiety. Yet the price for that sanity is steep: they’ve severed ties with the mainstream media, and closed their windows to the outside world. They play in a dark living room, taking solace in their music, while outside, the rest of their suburban neighborhood panics. Messages of doom flash on their television sets, and they take to the streets and their automobiles in a spontaneous media-driven evacuation.

In Palmieri’s apocalyptic scenario, the sun is shown as a black hole, sucking in the atmosphere and swirling the sky around it. Yet there’s something oddly beautiful about the solar meltdown, and some of the fleeing motorists even stop to stare in awe at the heavenly menace. In contrast, there’s nothing very nice about the way the evacuees are treating each other: they scream, hurt themselves, trample over the fallen, and, unable to cooperate, find themselves stuck in traffic jams. Do we have more to fear from the cataclysm, or from the careless cruelty with which we behave during moments of crisis?

For those of you who are counting, this marks the fifth Geffen video which we have championed this year, and we couldn’t be happier to work with our Geffen cohorts Lisa and Christian on this campaign. Finch will be doing a headlining tour in the US throughout June and will be able to accommodate both video interviews and video ID’s, so please don’t hesitate to get in touch! If you need more info contact Andy Gesner at 732-613-1779, or email info@HIPVideoPromo.com. You can also visitwww.Geffen.com, or www.FinchMusic.com to learn more about this dynamic and compelling quintet