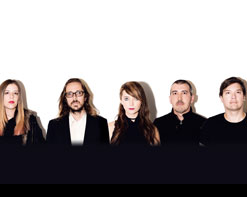 FIRE TO THE STARS

With their previous video offering for “Made of Fire,” the Melbourne-based collection of Australians and ex-pat Swedes Fire to the Stars delivered a true piece of art. Every element of the video was masterfully executed, from the lighting to the wardrobe, right down to the post-production. For their follow-up single, “Stay Down,” the band has upped the ante even further by blurring the lines between music video and short film. The end result is a striking piece that stimulates not only the eyes and ears, but also the hearts and minds as well.

Both singles are from their full length debut, Made of Fire, an album that brilliantly celebrates their influences like Dead Can Dance, Grouper, and My Bloody Valentine. After the strength of their debut Keep You Safe EP (260k+ downloads), the group has evolved from a blip on the critical radar to a full-blown event. Indie publications like Diffuser.net, System Failure, The Sirens, and even the Austin Music Video Festival have all come to the table to show their admiration. For the new video, “Stay Down,” the band knew that since they were already breathing rarified air that they needed to go beyond everyone’s expectations. As expected, they’ve blown everyone out of the water.

Directed by Kyle V. James and Michael Bourne, the “Stay Down” video begins with a shocking visual of a man dousing himself with gasoline and engulfing himself in flames. As the fire and smoke consumes him, painful memories of a failed love blast across the screen. This broken soul has clearly lost all will to carry on, and as other scenes appear of him wandering aimlessly his only hesitation is on the top of a desert mountain, where a text briefly appears on screen… “Why am I doing this?” One last flashback to a better time reveal that perhaps he’s had a self-destructive streak all along, only now he no longer has someone by his side to mitigate that urge.

We’re incredibly excited to have the opportunity to bring such a beautiful piece of art to viewers. We would love nothing more than to hook you up with a copy of the Made of Fire LP, so get in touch and let us know you’d like one! Please contact Andy Gesner and the HIP Video Promo team at (732)-613-1779 or email us at info@HIPVideoPromo.com. You can also visit www.Facebook.com/FireToTheStars for more info on Fire To The Stars.

Visit Fire To The Stars

For info about other Fire To The Stars music videos, click HERE