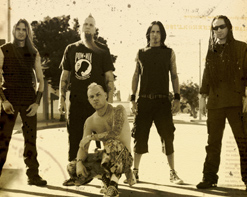 Attention metal music video lovers! It’s Andy Gesner and the staff from HIP Video Promo, here with the latest from a filmmaker who continues to produce evocative three-minute statements, and a band that is sure to be making waves of their own in ’07 and beyond. One of the most gratifying things about what we do here at HIP has been watching the development of young cutting-edge directors – especially since contemporary indie videomakers possess a remarkable ability to match their visual styles to many different types of music. Bradley Scott is a terrific video storyteller, and his acute sense of drama and peril has been on bold display in clips we’ve sent you by The Firebird Band (“Satellite Delay”), Now It’s Overhead (“Wait In A Line”) and The Comas (“Invisible Drugs”). How well will his narrative style – which has already proven so effective in bringing to the foreground that sense of destabilization and insecurity that haunts so much indiepop – fit with a straightforward, take-no-prisoners metal band like Five Finger Death Punch?

As it turns out, the collaboration works perfectly. Much of the credit goes to the members of the band, who prove to be adept – and emotionally provocative – silent actors, comfortable and confident in front of the camera. But that shouldn’t be any surprise to anyone who knows the Five Finger Death Punch story. Every member of this quartet has, in the words of the band’s MySpace page, earned their “metal black belt” by gigging and recording for years in theatrical heavy rock bands. Singer Ivan Moody fronted Ozzfest favorite Motograter; guitarist and founder Zoltan Bathory starred in U.P.O. and other Eastern European metal acts; second guitarist Darrell Roberts played with the legendary W.A.S.P; bassist Matt Snell and drummer Jeremy Spencer are studio pros and veterans of progressive metal outfits. They’ve become a surprise smash on the Family Values tour this summer, and although they’re a relatively new band, their devoted fans already have a collective (and descriptive) name for themselves: The Knuckleheads.

“The Bleeding” only hints at the pure, pounding fury of upcoming The Way Of The Fist. Produced by Stevo “Shotgun” Bruno (Motley Crue), Mike Sarkysian (Spineshank) and Logan Mader (Machine Head), the debut album is a bone-crunching amalgam of classic and contemporary metal styles. “It was important”, explains the band “that everyone involved at any stage of this recording was a diehard metalhead.” The lead single is the most melodic and radio-friendly track on the set – but it possesses a grim and austere potency all its own, and Bradley Scott’s courageous and descriptive video makes that power manifest for viewers.

But first, he wants to make sure he shows us the band. Five Finger Death Punch are an impressive-looking stage act – big beards, tattoos, and muscles – and they sing and play with great authority and purpose. Scott weaves a tragic story between the performance shots: a tale of loss and love gone wrong. Ivan Moody plays the protagonist; we watch him walk down the street where he lives, dodging the menacing looks of his neighbors. From there, we flash back to scenes of better times – he and his girlfriend, drinking with his bandmates, having sex, smiling at each other. But a quarrel tears through this idyllic scene: mascara is smeared, bottles are broken. When the story reaches its frightening conclusion, Scott and Five Finger Death Punch envelop the viewer in waves of anguish and remorse. Powerful stuff, indeed!

It is once again our greatest pleasure to be working with the folks at The Firm music and we want to thank Danielle Johnigan for all of her hard work making this possible. We would be happy to set you up with copies of The Way Of The Fist for all of your on air giveaway needs, and would also be pleased to set you up with a video interview when they come to your area, so please don’t hesitate to be in touch. If you need more info, call Andy Gesner at 732-613-1779 or email us at info@HIPVideoPromo.com.