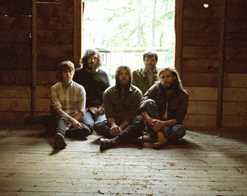 Greetings cherished programmers! It’s Andy and the staff from HIP Video Promo here with a clip from indie-rock’s finest. Five stars in The Observer, five stars in The Guardian, five stars in Mojo, five stars inThe London Times. The new Oasis album? Nope, the band that has achieved this remarkable feat isn’t even from Britain. They’re Seattle’s own Fleet Foxes, and their radiant, effortless folk-pop has made them indie stars – and critics’ favorites – on both sides of the Atlantic. The band performs rich, elliptical, sophisticated songs that feel indebted to classic sources; ones that seem to draw from a deep reservoir of experiences and an intimate familiarity with the roots of American music. Astonishing, then, that the group has only been playing since the middle of this decade, and that principal songwriter and frontman Robin Pecknold is 21 years old.

He may be young, but he knows exactly where he’s going. Before writing the songs on Fleet Foxes, Pecknold famously elaborated his vision on the band’s much-visited mySpace page. “We decided to put an emphasis on harmony, simple three- and four-part block harmony”, explained the songwriter and multi-instrumentalist. “The songs would be simple as well, songs about our friends and family, history, nature, and the things around us in the Pacific Northwest.” Pecknold went on to discuss his desire to depart from songwriting convention and predictable verse-chorus-verse structures. Then the Seattle frontman gathered his band together – and did exactly as he said he would.

The debut album has been likened to labelmates Iron & Wine and Band Of Horses – but also to Sixties spectral Americana like The Band, Gram Parsons, and the psychedelic Dead. Fleet Foxes harmonies and rounds are indeed simple, but they’re also weird and bewitching, and they seem to summon dreams of the mystic frontier. “White Winter Hymnal”, the lead single, is built around those harmonies – in fact, it opens and closes with muted a cappela sections. In between, the song soars, driven by echoed drums, gentle six-string, and reverbed voices. It’s as straightforward as Pecknold wanted it to be, but watch out: in their elegant simplicity, Fleet Foxes can occasion some altered states.

Sean Pecknold’s claymation clip for “White Winter Hymnal” casts a spell of its own. It’s a bewitching fable; it feels primal, natural, weird, pregnant with meaning. The main character is a bearded man – perhaps a god, perhaps a symbol of the changing seasons – who turns a wheel, and cranks the sun, moon, and stars through the sky. His expression is hard to read, but it’s heavy with the burden of his responsibility. As he twists the lever with bent back, flowers bloom and open up, snow melts, plants stretch toward the sky, and other puppets begin to clap their hands and play music of their own. The models are fantastic-looking, and Sean Pecknold’s sculpting is lovingly and elaborately detailed. The old man’s beard sways in the wind, his eyelids flutter, his head and fingers move realistically; all the objects have visible weight and depth to them, and this verisimilitude heightens the emotional intensity of the clip. Most spectacular of all, though, are the lighting effects – the sun winks on and casts real shadows, illuminates the sides of the puppets’ faces, and sweeps across this haunted, wooded landscape.

It is always inspiring to work with Lacey Swain and the Sub Pop team to champion a top-notch indie rock artist. We do have a healthy supply of the self titled record, so don’t hesitate to get in touch for your copy of Fleet Foxes for your on-air giveaway needs. Also be sure to check out the band when they come through your town, and let us know if you would like to set up any interviews or video IDs with Fleet Foxes. If you need more info, call Andy Gesner at 732-613-1779 or e-mail us at info@HIPVideoPromo.com. You can also visit www.subpop.com to find out more about Fleet Foxes. .