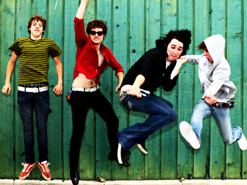 Howdy programming pals! It’s Andy Gesner and the staff from HIP Video Promo, back with another exciting clip from a new act that’s going places. The members of The Frantic are certainly young: they’ve been playing together in their Chicagoland hometown since they were 9, and they’re still all teenagers. But their youth and exuberance isn’t the first thing you’ll notice about the band. Instead, they lead with their furious pop-punk guitar attack and their memorable riffs and melodies. The Frantic write songs that jump out of the speakers, grab listeners, and don’t let go – and frontman Kyle Dee is the sort of arresting presence on the microphone whose voice, once heard, can’t easily be forgotten.

Consider “Audio & Murder”, the lead single and title track from their upcoming debut. The song really is one giant, glistening hook: a slice of three-chord punk majesty reminiscent of Alkaline Trio at their most direct. The band cuts right to the chase, giving listeners an irresistible shout-along chorus, an explosive beat, and a manic, invigorating performance by Kyle Dee and crew. And like all great punk songs, it’s over before you know it – it blows in on a gale of guitar distortion, makes its point with emphasis, and ends at just above the two-minute mark, leaving you hungry for more.

The Frantic has a knack for anthems like this one – tracks that make you want to pick up a guitar and bash along. Audio & Murder is loaded with pop-punk standouts; they’re the type of songs that budding bands will be covering in their sets five years from now. Mudrock (Godsmack, Avenged Sevenfold, Alice Cooper) has toughened and brightened the band’s already-electrifying live sound, and presented The Frantic as the natural heirs to Good Charlotte’s irreverent pop-rock crown. Not that the veteran producer had to sweat: anybody who has seen The Frantic in concert knows the power that the quartet generates. They’ve already opened shows for The Dillinger Four, The Bad Brains and Riverboat Gamblers, and the day is coming soon when they’ll be the headliners.

Stock Yard Films is one of the most versatile video production teams in Chicago – they’ve shot clips for corporate clients as well as local rappers – and their energy and attitude makes them a natural match for The Frantic. The “Audio & Murder” clip is a delightful nose-thumbing at the culture industry, and a winning demolition of propriety. The Frantic are pitted against the suits (and celebrities) on WSUX Radio, and we’ll bet you can guess who comes out ahead. They storm the station, break vinyl by the “Emo-ticons” over the head of the goofy deejay and hijack the airwaves. Later, the band addresses the televised “Billbored” music awards in true punk style – by chucking a slice of pizza at the screen, and letting it hang there.

All of us here at HIP are very excited to be working with Christian at Sinister Muse and David at Empyrean to bring you this high energy clip! They’re been kind enough to set us up with copies of the Audio & Murder CD as well as posters signed by The Frantic that will be perfect for your on air giveaways and contests, so please be in touch if you’d like for us to set you up. Also, be sure to catch The Frantic’s impressive live show when they come to a city near you, this is a set you won’t want to miss! If you need more info, call Andy Gesner at 732-613-1779 or e-mail us at info@HIPVideoPromo.com.