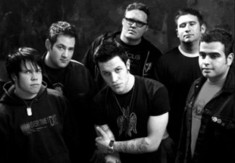 The members of Further Seems Forever have remained true to their original roots, despite some lineup changes; but, as bassist Chad Neptune explains “we wanted to play music that didn’t limit us to one style”. Many of the band members have quite a bit of experience, including a stint with Chris Carraba (Dashboard Confessional) as their front man: but here they explore new musical territory without sacrificing a bit of quality or energy. “The Sound” is built around rousing guitar playing and tuneful vocals that show they haven’t lost any of their hard edge.

One can readily detect the influence of seminal post-Invasion British music, but the overall sensibility is all their own. The band have earned quite a bit of respect (and success) by touring tirelessly. This video, “The Sound” reached #1 at www.mp4.com, and the album, How to Start a Fire, debuted at #1 on Billboard’s Heatseeker’s chart.

Vocalist Jason Gleason, the main focus of the video, goes trekking through the monochromatic solitude of glassed-in elevators and urban mass transit like a lone conquistador through the primeval Gulf Coast wilderness, courageous and undaunted, while the band strides behind him . As the clip progresses they are encouraged by the increasingly large and demonstrative audience in the performance segments of the video. The spartan but professional production values of this clip are a fine complement to the band’s performance, particularly Gleason’s passionate but literate lyrics.