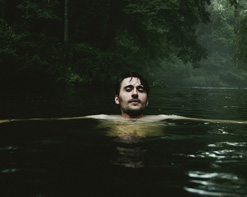 New York, San Francisco, Los Angeles- most people think of the big cities when asked where to find great music, but Birmingham, Alabama- known as “the Magic City” and home of independent record label Communicating Vessels- has built and maintained a thriving music scene. After his prior band The Grenadines broke up, it was no question that Michael Shackelford would once again partner with Communicating Vessels for his new project, Future Elevators.

The name Future Elevators comes from a song that was never finished, and it feels fitting for the dreamy, almost ethereal pop music that Shackelford has created. He tells The Seventh Hex, “The world is a screwed up place to live in. Enjoy the times when there is euphoria for you.” Last year, Annie Mac at BBC featured the band on her global playlist, causing them to go viral on Spotify in the UK and Canada, and it’s easy to say why. The debut release Future Elevators has drawn comparisons to Passion Pit, Phoenix, MGMT, and Air; Never Enough Notes calls is “space-age dub that is both airy and exciting” and Atlas and the Anchor praises its “eclectic yet cohesive sound that incorporates dusty folk, blues, forward-thinking R&B and hints of 70’s glam and disco alongside 60’s psych-pop”.

The “Modern World” music video was filmed in the unmistakable landscape of New Orleans. The video pans around the streets of the Big Easy, and we see its residents groove to the music and look up at the sky. Upon our close-up shots, we get cuts of dozens of pairs of eyes flashing over the screen, showing how we can all incorporate multiple perspectives into our own lives and how we see the world. “Modern World” was directed by Chris Lawson, with cinematography and editing done by Chris Hilleke.

It’s always a pleasure working with the Communicating Vessels team, and we’re elated to be teaming up with Michael Shackelford yet again. Please let us know what we can do to get the Future Elevators “Modern World” video into your programming! For more information please contact Andy Gesner and the HIP Video Promo team at (732)-613-1779 or email us at info@HIPVideoPromo.com. You can also visit www.Future-Elevators.com or www.CommunicatingVessels.com for more info on Future Elevators.