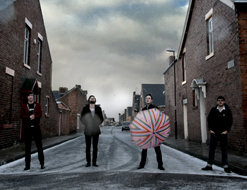 The dust has barely settled on the last decade, and there’s no telling which of the many fine records released in the late ’00s will stand as landmarks. But if there’s any justice in modern pop, News And Tributes, the 2006 effort by The Futureheads, will soon be revered as a classic. The band’s fusion of angular six-string riffs, madly-catchy pop choruses, spiky new wave and adventurous prog, geometric sonic architecture, heavenly four-part vocal harmonies, and thought-provoking (and occasionally chilling) lyrics left listeners and critics breathless. No more ambitious or imaginative rock record saw release that year, and News And Tributes rightfully topped scores of “best of” lists.

One of the most notable characteristics of News And Tributes was its restlessness: the Sunderland quartet came off as a band too anxious and urgent to settle into a comfortable groove. Their vision seemed singular, personal, dangerous, deliberately unorthodox, and more than a little adventurous. So it came as no surprise to us that, after News And Tributes, The Futureheads made a conscious decision to eschew label support and release their music independently. The Chaos, their latest set, will be released by Dovecote Records here in the US and on their own Nul Records overseas. Unfettered by major label demands, you can expect more wild creativity, more uncompromising songwriting, more sonic experimentation, and, of course, more infectious melodies and inspired small-combo arrangements.

That said, “Heartbeat Song”, the lead single from The Chaos, might just be the most accessible thing they’ve ever recorded. Oh, sure, the stratospheric vocal harmonies are still there, as are the razor-sharp guitar sounds. There’s even a tricky chromatic passage in the chorus melody. But “Heartbeat Song” matches its rafter-raising chorus with an arrangement that wouldn’t sound out of place on a contemporary hit radio playlist. Moreover, Barry Hyde sings it all with an arresting combination of passion, bemusement, and vulnerability. It’s a magnificent performance from one of Britain’s most endearing frontmen.

Hyde and his sharp-looking bandmates are awfully comfortable in front of the camera. Prior performance clips have been memorable: the mirrored effects and quick cuts in the “Area” video were a perfect match for the song’s funhouse atmosphere. The Futureheads play in the “Heartbreak Song” clip, but in an entirely different kind of setting — an old-school television soundstage. The four bandmembers are contestants on a panel-style (think Family Feud) game show of their own devising, and they’re doing battle with square-looking opponents, an overzealous host, and a sexed-up presenter. Period-specific details are scrupulously presented: polyester tops and big sunglasses, wide collars and shaggy hairdos. Even the color scheme — station-wagon orange and light grey — is pure Seventies. Prizes include a vintage television set, an AM radio, and a wooden tennis racket. Clever and compulsively watchable, the “Heartbreak Song” demonstrates a lesser-known, but by no means lesser, quality of the Futureheads: the band’s great sense of humor.

We’re all very excited to once again be working with the good folks at Dovecote Records to bring you this exceptional new video. If you need more info, call Andy Gesner at 732-613-1779 or e-mail us at info@HIPVideoPromo.com. You can also visitwww.DovecoteRecords.com or www.TheFutureheads.com to find out more about The Futureheads.

For info about The Futureheads’ previous video, “Skip To The End” click HERE