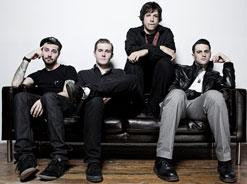 Here at HIP, we can’t help but be completely bursting with excitement about promoting our 900th video! An even bigger plus is when that band is The Gaslight Anthem, who we’ve worked with last year when promoting their three video reel, which included “Great Expectations,” “The ’59 Sound” and “Old White Lincoln.” And now The Gaslight Anthem has brought forward an unforgettable follow-up video and album, with the title track “American Slang.”

There isn’t much that hasn’t already been said about this phenomenal band from the last time. Jersey-centric to the core, The Gaslight Anthem has long been referred to as the punkier, quartet version of Bruce Springsteen – working class upbringing and all. The “American Slang” video doesn’t necessarily deter you from that opinion either, but it gives you great insight into the boys contemplating life in the 21st century as they wander the streets of New York.

Shot in black and white completely – and by the same director who helmed the aforementioned trio of videos, Kevin Custer – “American Slang” overlooks the Manhattan skyline and the constant activity that takes place in the city. Shots of the American Stock Exchange and the Statue of Liberty reiterates that pride of being an American while scenes of the New York Police Department, kids playing in a grand fountain and rows of gravestones take you back just a little bit. Amidst all of this is footage of a live performance, showcasing just why the stage is where The Gaslight Anthem thrives the most. “American Slang” has already been dubbed by MTV.com’s Buzzworthy Blog as a “Video You Need To Know,” and you’ll see it’s with good reason.

The single “American Slang” is the lead track off of The Gaslight Anthem’s third album holding the same name. It’s undoubtedly in the running for one of the year’s top albums, receiving incredible reviews across the board from The New York Times to SPIN to Pitchfork.com. Most notably, Rolling Stone had this to say: “Gaslight’s first two records were soulful punk albums that brought recovering emo kids and middle-aged dads into the fold. American Slang arrives with serious advance buzz: The choruses are more sculpted, but the band’s tough-as-leather rush is as hard as ever, and [lead vocalist Brian] Fallon howls so hard, he sounds like he’s aiming to get a section of the Jersey Turnpike named after him.” In addition to all of that, American Slang has already made a killing on the Billboard charts, namely peaking at No. 16 on the Billboard 200.

Help us celebrate our 900th video and the impecable rising success of The Gaslight Anthem. They’ve sold out shows across the States, performed as musical guests on The Late Night with Jimmy Fallon and are on the fast track to the big time, headlining the grandiose Radio City Music Hall in September. This is a genuine, American rock and roll band that deserves all that they have coming to them, and you won’t want to miss out on the chance to support their video for “American Slang.” Thanks so much to the folks over at Side One Dummy for bringing this clip forward. If you need more info, call Andy Gesner at 732-613-1779 or e-mail us at info@HIPVideoPromo.com. You can also visit www.SideOneDummy.com or www.GaslightAnthem.com to find out more about The Gaslight Anthem.