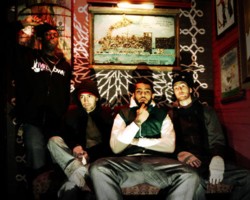 Happy Spring everybody, it’s Andy Gesner and the staff from HIP Video Promo. We’re pleased to be continuing our relationship with Florida-based indie label Fueled By Ramen by servicing you the debut clip from Gym Class Heroes. As you might expect from the cheeky name (the labels slogan is “No Food, No Sleep, Just Records”), Fueled By Ramen is an eclectic and adventurous label, and Gym Class Heroes are a worthy addition to their roster. Hailing from Upstate New York, this underground hip-hop act plays all their instruments live, a la The Roots, and have developed a pretty singular musical imprint. Indebted to indie rock and emo-pop as well as alternative rap (they may be the first hip-hop act ever to namecheck Jimmy Eat World), Gym Class Heroes markedly refuse to follow trends or bow to expectations . They’re crisp, propulsive, a little wigged-out, hooky – and they’ve got a dynamite bass sound.

But the star of this show is the frontman. Rapid-fire, articulate and self-deprecating, with the soul of a spoken-word poet, the tellingly handled Travis “Schleprok” McCoy spins stories of romantic beleaguerment and ambivalence uncommon in hip-hop. It’s Travis who gives Gym Class Heroes their slightly off-the-wall, Bizarre Ride II The Pharcyde feel, and it’s the elastic MC who brings the emotional resonance to the music. If he proves he can pull oddball associations out of the air with the best of them on “We Just Freestylin'”, he’s also willing to explore the pain of high school homophobia on “Faces In The Hall” – an unusual subject for a rapper indeed.

It helps that he’s got an empathetic band behind him. On “Papercuts”, the lead single, his cadences are simultaneously echoed and accented by bassist Ryan Geise, who breaks from the loping groove from time to time to help Travis drive his points home. While Gym Class Heroes don’t use sampled tracks, they know the old trick of suddenly pulling the treble instruments away for a few bars to emphasize the rapper’s flow. As The Brand Nubian-like guitar part darts around the periphery of the mix, Travis rhymes about his sexual obsession with a flighty, unreliable girlfriend. “She says she loves me but I pick my nose too much,” he confesses, while musing awkwardly about dropping her a letter “in a gentlemanly way”.

Director Alan Ferguson (Jay Z, Busta Rhymes) gives us a window into Travis’ desperation. We watch him interact with his “dream” girl – she teases his ear blithely with her tongue, then pushes him away. She yells at him, raids his fridge, knocks over his table. He’s uncomfortable with her advances, but he can’t turn her down; when she’s not feeling amorous, she’s usually out the door. Reversing the stereotype of the insensitive male with commitment issues, Ferguson presents Travis as romantically hapless but sympathetic. When his girl gives him hell about leaving the toilet seat up, we know that on some level he’s laughing along with us at his own pathetic state.

Meanwhile, the band has set up in the MC’s living room. We watch him rhyme in front of a wall covered with cut-out pictures of his girl, then, in one of the most unique domestic shots in hip-hop history, he raps while he’s brushing his teeth. Later, he finds his girl on the hammock with Geise, massaging the bass player’s back. We come to see a unique twist in the video culminating with the romantically challenged MC breaking down in a violent attempt to separate his imagination from reality. By the end of the video he’s frazzled, bewildered, face down on the floor, his bandmates restraining him. It’s an emotionally charged finale to this darkly humorous indie-rap hybrid.

Here at HIP we’re very excited to be working with the outstanding crew at Fueled By Ramen. Special thanks to John Janick for letting us be a part of the Fueled By Ramen promotional team. We’ll have discs for you to give away, of course; and when the band’s tour passes through your area, we’ll be happy to set up a video interview or video ID for you. They are currently on tour with labelmates The Academy Is… and Fall Out Boy. If you need more info call Andy Gesner at 732-613-1779, or email info@HIPVideoPromo.com . You can also visit www.fueledbyramen.com,  to find out more about this band.