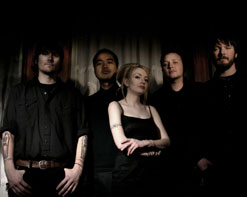 Hello to all my music video programming friends! It’s Andy Gesner and the staff from HIP Video Promo with another intriguing indie rock vid! It’s our contention that Denver is one hell of an underrated music city. There’s a long, if unrecognized, history of punk and experimental indiepop in the Mile High. The solitude of the Rocky Mountains seems to engender a particular brand of alt-country and roots-rock, too: slow, reverbed, lonely-sounding, ghostly. Collisions between these two genres have been producing sparks for decades. Right now, the hottest band in Denver is a fusion of toughindie-rock and spacious, hypnotic Americana – a band with a majestic twin guitar attack and a frontwoman with a voice as clear and wide as the Big Sky. We’re thrilled to be working with the renowned Suburban Home Records to let the nation know what Colorado music fans already do: Ghost Buffalo is a group on the rise.

Denver has already fallen hard for singer Marie Litton. Westword, the city’s alternative newsmagazine, has named her the best frontwoman in town, raving about how well her “soaring, haunting voice” fits the group’s “heartache-weary country rock”. Litton’s singing finds the middle ground between the icy placidity of Jesse Sykes and the plaintive, pop-friendly approachability of Sarah Shannon of Velocity Girl. She animates these stories of late-night longing and doomed long-distance romance with poise, grace, and a rare emotional complexity. While her songwriting is the indisputable heart of Ghost Buffalo, her accompanyists (several of whom, including ace guitarist Matt Bellinger, have logged time in Planes Mistaken For Stars) find the elusive intersection between twang and stomp with unerring precision.

“Hell Here”, the lead single from Ghost Buffalo, is perhaps their most representative track – and the one that foregrounds the group’s twin influences most effectively. The song begins as a scratchy field recording unearthed from a time capsule buried at the foot of the Rockies might: strained, aching, weirdly fascinating. But by the end of the first verse, the production has changed, and the vibrant color of Ghost Buffalo’s sound is made manifest. Litton, channeling her most desperate hour, spins a dark-night-of-the-soul tale that caresses the listener like a chilly wind. Sleepless and haunted, she drags herself down hallways, head in hands, searching for a voice of hope.

Video director Justin Staggs (The Soviettes, Cardinal Sin) is an old hand at framing band footage: the mood and lyrics of the song inform his visual interpretation of the performance, and reliably, he makes the imagery of the clip resonate with the song. For the “Hell Here” video, Staggs throws spots on isolated images inside an old house – a door, a grandfather clock, antique wallpaper. There’s a definite Victorian feel to the footage; the architecture is Nineteenth-century inspired, and maybe even a little creepy. Cold circles of light are thrown on dark surfaces, and Staggs fades between the images in his crosshairs. The result is something like a fever dream – it’s stark, spectral, insular.

Marie Litton is, as you’d expect, the center of Staggs’s attention. When she isn’t fronting the group, she is shot barefoot in a 1950’s gown. As she rests, unsettled, on a sofa, her face communicates a deep longing. Adding to the Hitchcockian feel of the clip, Staggs incorporates shots of blackbirds in flight and a glowing, old-school television test pattern. It’s like looking through a pinhole into someone’s half-unearthed memory – a projection of private visions suggesting reservoirs of placid, unspoken pain.

Here at HIP we are ecstatic to be working with Virgil Dickerson and the great folks at Suburban Home Records to bring you this engaging clip! Ghost Buffalo is going on a lengthy nationwide tour this spring, so if you would like to set up an interview or secure video IDs, please don’t hesitate to contact us. If you need more info, call Andy Gesner at 732-613-1779 or e-mail us at info@HIPVideoPromo.com. You can also visit www.ghostbuffalo.com to find out more about Ghost Buffalo.