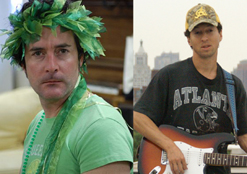 Hey, everybody, it’s Andy Gesner and the staff from HIP Video Promo, here with a brand new clip from a clever new group with plenty of stories to tell. Nick Weber and Charles Goodan have named their act wisely — men (and, for that matter, women) have been having girl problems from time immemorial. Weber’s difficulties approaching and handling members of the fairer sex motivated the band’s first two singles — the model-baiting “Mette” and the hilarious cellphone nightmare “Cancel”. On those songs, Weber established the characteristic Girl Problems voice: wry, chatty, playful, aroused but weary of lovers’ games, intrigued but cautious, smart but intentionally self-parodic. He’s an everyman, coping as best as he can with every man’s urges, wandering through a city of beautiful girls, chasing many, landing a few, and juggling them all as skillfully as he can.

The Grammy-winning Charles Goodan pairs his bandmate’s tales with the music that they seem to imply. Girl Problems combines a refreshing mix of mid-twentieth century pop sounds hearkening to bands such as The Beatles, the Stones and Buffalo Springfield and modernizes it with a seductiveness in the style of Digable Planets and Beck. Nick Weber’s lyrics are about the things people see but forget to notice. Goodan’s instrumentation gets them noticed.

But as always with Girl Problems, Weber’s humorous storytelling is the core of the song. He’s got his complaint down cold, sure, but he keeps it in perspective: if men invariably have girl problems, they’ve got to accept their fair share of the blame for them. “I’ve got two sisters and I want them to be happy”, he confesses, “so I wouldn’t want them to end up with guys like me”. And what kind of guys are those? Well, they might want to bone all the women they see, but at least they’re self-conscious enough to recognize that their own biological urges keep getting them into trouble. But we pull for Weber anyway — he’s a lover, not a fighter. He’s not looking to punish anybody, or to get his revenge on the women who spurned him; he just wants to stop quarreling long enough to get down to business.

The clip for “Girl Problems” is similarly playful — and also entertainingly confusing. Weber and Goodan have surrounded themselves with female impersonators: some obvious, and some quite believable. To make matters more bewildering, a few of the girls are dressed up as men. Since the cuts come fast and furious, you’re never exactly sure of the gender of the person you’re watching. Which makes Weber and Goodan’s point: we may think we know what women want, but more often than not, we don’t even know who women *are*. The two members of Girl Problems spend the clip looking pleasingly befuddled; at one point, Weber takes the microphone with a tea cup in hand. He’s trying to get his bearings on a battlefield of the sexes that is constantly shifting. Appropriately, the “Girl Problems” clip never lets the emcee rest.

It’s always our greatest pleasure to help out our fellow Jerseyans who exude a remarkable creative spirit, and we are very excited to be working with “Girl Problems” director Eric Weber and Sean Devaney from Tenafly Film Company to expose Girl Problems nationwide. We are confident this irreverent clip will put the spotlight on Girl Problems, but also introduce Tenafly Film Company as a Jersey production company with tons of promise. We’re happy to hook you up with anything Girl Problems related that you may need, so please don’t hesitate to be in touch! If you need more info, call Andy Gesner at 732-613-1779 or e-mail us at info@HIPVideoPromo.com .