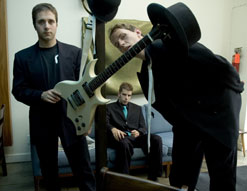 Howdy! It’s Andy Gesner, and the hard working staff of HIP Video Promo, here with an intriguing clip from a new voice from north of the border. And we think you’ll agree that there’s nothing out there quite like them: that their sonic signature is a bold one, and their arrangement decisions are both imaginative and expressive. The songs on Safety Shackles, their confident new album, feature deftly-woven acoustic and electric guitar patterns, woodwinds, rich cello, rubbery didgeridoo, ghostly banjo, and twinkly celeste and glockenspiel. Percussion, too, is invariably creative: skittering snare augmented with occasional machine beats, bells, and even the occasional timpani. Sean Goebel’s melodies are quietly complex: they don’t always do what you’d expect, and quite often, they lead listeners down strange and fascinating detours. In short, the spell cast by Good Question’s music is a subtle one — but it’s a potent one, too.

In the band’s hometown of Calgary, they’re already recognized by music fans and journalists for their expressive performances and their ambitious songs. But although Good Question’s music hasn’t reached a mass American audience yet, they’re better known than you’d think: they’ve toured all over the world, including mainland China (!), and they’ll be back out on the road this winter in support of Safety Shackles. “Take A Moment”, the album’s kick-off cut, is quintessentially Good Question: a gently infectious melody, an elliptical, engrossing acoustic guitar riff, atmospheric high strings and gorgeous cello, strong vocal harmonies, and Goebel’s customary philosophical lyrics. He’s a deep thinker — one comfortable speculating about the mysteries of life and death — and the singer’s literary turn has drawn comparisons to other formidably-intelligent songwriters, including Colin Meloy of the Decemberists, Emily Haines of Metric, Neil Finn of Crowded House, and Jonathan Meiburg of Shearwater.

But don’t be misled: Goebel and his bandmates have lighthearted sides, too, and the predominant tone of Good Question’s music is cheerful and inviting. The band’s notable sense of whimsy is on display in the profoundly-rewatchable clip for “Take A Moment”. Goebel sits at the back of a city bus with his acoustic guitar; he’s not busking, but he does sing at concert volume. At first, it doesn’t seem like any of the other riders are acknowledging his presence — are they blocking him out, or are his efforts to communicate falling flat? But, as always, Good Question works subtly and midway through the song, there are signs that he’s getting through. One rider, nose down in a laptop, types the lyrics on her screen. Another moves to the music, gingerly at first, but then with increasing boldness. An unlikely backing vocalist chimes in on the chorus. Once Good Question cellist William Stam boards and sets up his instrument, it’s clear that a very strange concert is taking place, and one greatly appreciated by the band’s fellow riders. “Turn your head from side to side”, sings Goebel — and everybody on the bus does as he asks.

We’re very excited to be working closely with Sean Goebel and Good Question to bring you this winning clip. If you need more info, call Andy Gesner at 732-613-1779 or e-mail us at info@HIPVideoPromo.com .