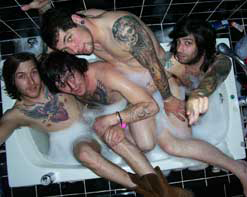 Hey, everybody, it’s Andy Gesner and the staff from HIP Video Promo. Surely you’ve seen a Ray Cash or Paul Wall video, and watched the rappers perform in front of gleaming Cadillacs or Escalades, parked behind them at right angles. In the clip for “I Don’t Know How To Put This…But I’m Kind Of A Big Deal”, there are similar shots – but instead of candy-paint and shining rims, the members of punk band Grace Gale floss in front of beat-up vans with rusty, dented fenders. It’s a send-up of rap video conventions, sure; but if it was just simple mockery, it wouldn’t be so endearing. No, there’s a sense that Grace Gale loves their crappy Coloradan trucks just as much – if not more – than Young Jeezy loves his Benzo. This sense of perverse pride in rough edges pervades the clip, and the song, and everything else Grace Gale does, and it’s managed to turn the band into heroes of indie hardcore set and unlikely spokespeople for the déclassé and downwardly-mobile.

Hardcore is, by and large, a poker-faced world – sullen young men howling in anger and pain about serious subjects. Grace Gale doesn’t want to put any of those groups down. But the Colorado quintet is, nonetheless, a band on a mission: they’re here to inject a much-needed sense of fun and humor into the hardcore, metalcore, and screamo genres. Not that there’s anything intentional or messianic about it – these guys are just being themselves, touring the country and raising hell, and playing mindblowing punk rock shows that feel somewhere between spiritual revivals, drunken orgies, and office block demolitions. The music is pure revivalism; wild, frenetic, played at a breakneck pace and with fierce abandon. By never taking themselves or their music too seriously, the members of Grace Gale have made themselves an indispensable voice in contemporary punk.

Their album, A Few Easy Steps To Ensure Heli-Camel Safety, has been received by the underground like a blast of pure oxygen: back-to-basics hardcore with a metal edge and an emphasis on hedonistic entertainment value. “I Don’t Know How To Say This…But I’m Kind Of A Big Deal” (named after a gag line from the love-it-or-hate-it goofball comedy Anchorman) is a typical Grace Gale cut, powered by a relentlessly slammed snare, chugging rhythm guitar, and alternately sung and screamed twin-lead vocals. The cut is almost ridiculously live-sounding – but that’s the only way these inveterate road warriors know how to rock. Grace Gale maintains a nearly superhuman touring schedule, playing a show almost every night, and driving ridiculous distances almost every day. It’s no wonder they celebrate their van.

Andrew Watson (Cordova, The Fire Still Burns) directs the “I Don’t Know How To Say This…But I’m Kind Of A Big Deal” clip with an emphasis on the personalities of the bandmembers, bringing out Grace Gale as a Rocky Mountain version of the Young Ones. Not only does the band strike pop-radio poses in front of their beat-up touring vehicles, but they liberally apply hairspray while leaning out its windows. The guys bust up a dice game, skip down a back alley, try out some dance moves, and finish up on a town bench, licking ice cream cones. No matter how your momma feels about tattooed punks, it’s almost unimaginable that she, or anybody else, wouldn’t like these guys. They’re raffish and irascible, for sure, but every frame oozes charm. And when Watson provides performance footage, you can almost feel the heat – and perhaps even smell the beer.

We are very excited to be working with Creep Records to bring you this great clip! The band is on a nationwide tour, so please let us know if you’d like set up a video interview or ID. We also have plenty of copies of A Few Easy Steps To Ensure Heli-Camel Safety for on-air giveaways. If you need more info, call Andy Gesner at 732-613-1779 or e-mail us at info@HIPVideoPromo.com .