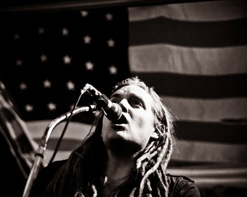 Howdy programming friends! It’s Andy Gesner and the staff at HIP Video Promo, here with a soulful clip from Graham Wilkinson that is full of open country landscape, rootsy-folk-rock-reggae, and honest down-to-earth lyrics that every person out there can find an instant emotional connection with. “Focus” is a song that comes from the heart and reminds all of us that we want what we don’t need and all we need is here in front us.

Graham Wilkinson was born in the small East Texas town of Denison to a Methodist minister father and a speech pathologist mother. Although he spent the rest of his life endlessly traveling from town to town and eventually the world, discovering his first guitar at sixteen, Wilkinson’s sound never quite betrayed his home. While overseas, his older brother and best friend Aaron Robert Wilkinson passed away in New York City. By far his brother’s death was the most difficult thing his family and he have faced. His brother’s influence is easily identified in many of Graham’s songs. Aaron was singing and writing in lower east side coffee shops on the cusp of the Anti-folk scene. Hanging out with the soon to be recognized Regina Spektor, Kimya Dawson & Adam Green from the Moldy Peaches as well as the guys from The Strokes who dedicated the their second album “Room on Fire” to Aaron. All of these musicians continue to make appearances at the Annual Memorial concert held in NYC every July. This event brought Graham back to focus on making his music a reality.

Unable to fit into one complete genre Wilkinson travels from one sound to the next with interchangeable musicians and his 2009 record Yearbook featured artists like Alejandro Escovedo (No Depression Magazine’s “Artist of the Decade”), Hayes Carll (HIP Client, and top played Americana Record of 2009), and Lloyd Maines (Multi-Grammy winning producer/and father of Natalie Maines). Graham now returns to attain an even bigger spotlight with his new record Spiritual Accessories. The record is filled with top notch soulful tracks and of course Wilkinson’s signature rasp.

From start to finish, “Focus” could and should easily belong at Bonnaroo or on the mainstream radio waves. The track is laced with optimistic messages, a strong beat, and easygoing welcoming vocal melodies in the manner of Dave Mathew’s Band or Jason Mraz. What truly sets Graham apart is his seasoned voice, so full of soul you might think Tom Waits sang it himself. Mix this in with an open air performance clip, set in the middle of a golden field, and you have yourself one hell of a winning clip. Despite being fully performance, the video features some very clever camera tricks to always keep the action interesting and exciting. In fact, some of the best videos out there are not diluted with story, but shot as a clever performance videos, and this is one of them. Graham is every bit as entertaining on camera as he is on tape, eventually vanishing from his stage by stepping out of a picture frame and vanishing into thin air!