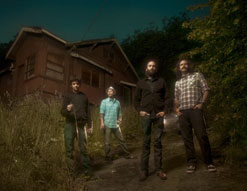 Hey, everybody, it’s Andy Gesner and the HIP Video Promo staff, here with the latest clip from one of the sweetest voices in contemporary pop music. Who says paper cut-outs can’t be psychedelic? Not the members of Grand Archives, that’s for sure. Their warm and winning video for “Oslo Novelist” is animated South Park-style — it’s stop-motion footage of two-dimensional construction paper shapes. But while the clip is amusing, Grand Archives aren’t playing it strictly for laughs. On the contrary: there’s something startlingly moving about this animated story of a Scandinavian rocketship rider who chases the pages of his unfinished novel as they float, weightless, through the distant heavens. And as we surrender to the visual logic of the video, it becomes an increasingly wild and sometimes-hallucinatory trip — our interstellar voyager travels through some truly bizarre and imaginative outer-space settings, and we’re right there with him, rooting for him to reclaim his writing from the void.

In a sense, the reluctant space-walker is a figure for Grand Archives themselves. For the past three years, they’ve been providing comfort — and lighting up the night skies — for countless listeners through their charming, softly radiant recordings. If we ever did find ourselves floating alone in zero gravity, severed from our mothership (and we all do from time to time), it’s a safe bet we’d want to be guided home by the gorgeous and emotionally steadying voice of Mat Brooke. The Grand Archives, the band’s winsome debut, certainly served that purpose for fans of adventurous pop; “Torn Blue Foam Couch” and “Miniature Birds” became two of the best-loved songs of 2008. Now, the Grand Archives are back with Keep In Mind Frankenstein, another set of softly transcendent compositions: Under The Archives says the set “floats high above the clouds, the work of bearded angels.”

Arguably, they’ve never soared any higher than they do on “Oslo Novelist”, the arresting centerpiece of Frankenstein and the band’s latest single. It’s a continuation of the best work on The Grand Archives: acoustic instruments, pedal-steel guitar, rich vocal harmonies, and an instantly-engaging performance by Brooke. A sound so stratospheric practically demanded an interstellar-themed video, and a group as humble and intimate as Grand Archives is well-served by an animation style that makes every frame look like a page from a beloved children’s book. That said, the main character in the “Oslo Novelist” clip is resolutely grown-up: alone in his spacecraft, he’s so absorbed by his own writing that he doesn’t even bother to peer out at the cosmos through his porthole. That focus is very nearly his undoing — so distracted is he that he fails to realize he’s accidentally opened the airlock. Once his pages float into deep space, he’s right out after them; he chases his work past forbidding moons and bizarre monsters, massive craters and unidentifiable interplanetary objects. When he finally catches the missing pages, he takes a moment to stare back at the viewer; relieved, he’s instantly sucked into a distant galaxy. An accomplished and imaginative animated short-story, the “Oslo Novelist” clip is also a meditation on the artist’s quest and an examination of the painful solitude of the writer at work — and maybe even a bit of a cautionary tale, too.

We’re thrilled to be bringing you another awesome video from one of our favorite bands, and we have the good folks at Sub Pop to thank! If you need more info, call Andy Gesner at 732-613-1779 or e-mail us at info@HIPVideoPromo.com . You can also visitwww.SubPop.com to find out more about Grand Archives.