Gregory And The Hawk “Ghost” 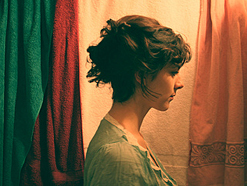 Salut, cherished programmers! It’s Andy Gesner and the staff from HIP Video Promo! For decades, female musicians everywhere have tipped their hats to Kate Bush — and so has the music business. With an unusual, quaky voice and mature lyrics, she won over converts from both artsies and mainstreamers—from both sides of the track. And she did it, not through gimmicks, but through talent and originality. It could be said that, after Bush’s star faded, the music business, subconsciously, has been looking for her replacement all these years.

It’s true that Gregory and The Hawk, A.K.A. Meredith Godreau, could never be Kate Bush’s replacement. Godreau is too original herself—in her own right—to be anybody’s replacement. Her most recent album released on Fat Cat Records, Moenie and Kitchi is a breath of fresh air—she covers ground that hasn’t been covered before, hanging acoustic ballads with insightful metaphors, and soft, fading vocals. But she does represent a few particular qualities of Bush that everyone has lauded ever since “Wuthering Heights” broke into the UK top 40—she has guts. She doesn’t compromise her music in order to fit a genre or to sell more records. And she has an aesthetic sensibility all her own. With these qualities on her side, we will certainly see Godreau go far, gaining respect and fans worldwide. She has already sold 15,000 copies of her songs as an unsigned artist, through MySpace and her own Web site. Now, as a signed artist, she can reach out even farther.

Godreau’s voice is soft and childlike, floating along in a sea of acoustics. Her voice gently melds with the plucking of the guitar, like a gentler My Bloody Valentine. Although her voice melts like popsicle on a warm summer day, this innocence is deceiving. For even though her voice is small and sunny, the words she sings are beyond mature. She speaks of loving wildly and blinding, and losing faith in loved ones—all through brilliant imagery that lets listeners feel as well as hear. She talks about stinging bees, skyrockets, and about the wild west. Through a world of strange, fantastic images, she tells simple stories about the age-old obsession humanity has with love.

In the video for “Ghost,” a forest backdrop signifies the wildness of the love affair. People in paper masks bounce around the woods, having a grand old time. Everyone is loving the sun coming down on them from the dappled woods. Everyone is bouncing through the meadow. The video itself is chopped-up and frantic, as if someone had broken the film reel and stuck the scenes back together haphazardly. Despite the crazed atmosphere, Godreau herself appears composed, dressed in long, elegant dresses, looking expectant, waiting for something. Maybe waiting for him?

We are totally psyched to once again have the opportunity to work with Anna Bond, Adam Pierce and the whole FatCat crew. The band will also be back in the US this month for new tour dates and we strongly encourage you to get in touch to set up video interviews when they are in your market! If you need more info, call Andy Gesner at 732-613-1779 or e-mail us atinfo@HIPVideoPromo.com . You can also visit www.FatCat-USA.com or Gregoryandthehawk.com for more info about Gregory and The Hawk.