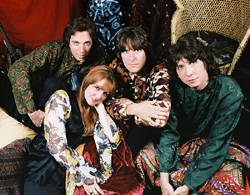 Greetings my esteemed programming friends. It’s Andy Gesner and the staff from HIP Video Promo, here to share another terrific clip from one of our favorite indie bands. This project is very special to us because not only is this video great, but this band hails from just down the street! Here in Central Jersey, we’ve been privy to the greatness of The Grip Weeds since the mid-Nineties – they live here, they play here, and they make their dazzling albums here in their own House Of Vibes studio. There, surrounded by their vintage equipment, the talented four-piece records slices of perfect, radio-friendly guitar-pop – psychedelic enough to appeal to record junkies, Sixties-retro fans, and the discriminating brass at Rainbow Quartz, but smooth and bright enough to fit seamlessly into a modern rock set. That The Grip Weeds have never been million-sellers is one of the most mystifying things about this altogether mystifying music business – but we’re hoping to help redress that by bringing the clip for “Astral Man” to the world.

The lead single from the altogether winning Giant On The Beach is a ringing, chiming, glorious pop-rock song. It’s a perfect fusion of sixties psychedelia and contemporary commercial power-pop, boasting the scrupulously-rendered sonic warmth of the former and the immediacy of the latter. “[The Grip Weeds] weave together vocal harmonies as if they’d grown up together singing in a church choir”, crows Magnetmagazine, possibly unaware that guitarist Rick Reil and drummer Kurt Reil are brothers. On “Astral Man”, the two singers execute a harmony so tight and Beatlesque you’ll swear you’ve accidentally wandered into Strawberry Fields. The Reils (along with ultra-melodic bassist Michael Kelly) spin a tale of a journey into innerspace, chanting mystical lyrics about rebirth and cosmic consciousness that fit perfectly with the soaring, interstellar feel of the music.

If you’re familiar with The Grip Weeds’ music, these glowing descriptions will come as no surprise to you – the sonic and compositional excellence of it is immediately apparent to even the most cursory listener. They’ve built their devoted cult following the old- fashioned way: listener by listener, handshake by handshake, small magical performance by small magical performance. The Sound Is In You, their late-nineties underground power-pop classic, was recently given a much-needed re-release by Rainbow Quartz, and it’s perhaps useful to think of the songs on Giant On The Beach as an extension of that record’s psych-pop mastery. The Reils have never sounded better than they do here. And not-so-secret weapon Kristin Pinell – one of the very few female lead guitar players in modern rock music – has never thrown down with such furious force, or played quite so lyrically.

The Grip Weeds are rightfully proud of their classic gear, and their beautiful hollow-bodied guitars and vintage amplifiers are featured performers in their videos. Ken Ross’ (Keith Richards, Smithereens) clip for “Astral Man” presents The Grip Weeds as the natural heirs to bands like Quicksilver Messenger Service, Syd Barrett’s Pink Floyd, and, especially, The Byrds. (In one image, the four-piece is shown on a magic carpet a la the cover of Fifth Dimension.) Stars, nebulae, and planets are superimposed over partially transparent shots of the bandmembers – they streak across the faces and bodies of the musicians as they play. The camera moves with the swirling lights and the shooting stars, sweeping across the stage like a comet. By the end of the three-minute clip, the group and its music have been thoroughly conflated with the interstellar phenomena we’re shown. The music, and song, are as inevitable as starlight, and bright and explosive as a supernova.

It’s always a pleasure to work with our pals at Rainbow Quartz, and we’re thrilled to team up with them again to bring you this imaginative video. We will have plenty of copies of the Giant On The Beach CD for on-air giveaways so please get in touch if this band gets you excited. If you need more info call Andy Gesner at 732-613-1779, or email info@HIPVideoPromo.com.