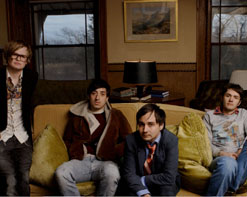 A tremendous hello to all of my esteemed music video programmer friends! It’s Andy Gesner and the staff at HIP Video Promo, delivering you one of the most unique clips we’ve seen so far this year. Here at HIP, we love the straightforward performance clips, but we can’t lie – it’s the odd, abstract, and creative videos that are closest to our hearts. Grizzly Bear is a young Brooklyn combo that has been making plenty of noise beyond the usual underground circles: the New York Times put Yellow House on their list of the very best albums of 2006. Footage of the photogenic young act playing “Knife”, their luminous single, would have been hypnotic enough. But that’s not what they’ve given us. Instead, Grizzly Bear, Isaiah Saxon, and Sean Hellfritsch have made one of the strangest, most beguiling, and most delightfully inexplicable videos we’ve seen in a long time. (And we see them all.)

Grizzly Bear makes otherworldly, sun-scorched, cosmic Americana: music with roots in the folk tradition and a sound straight from the stratosphere. “Knife”, their best-known (and maybe best-loved) song is four-plus minutes of ‘verbed out bliss, with radiant harmonies and subtly dazzling six-string. The band needed to find a setting to match the feel of the music – so they’ve taken their cameras and their broad imaginations to one of the most bizarre places on earth. The “Knife” video is set in Death Valley, California.

For Grizzly Bear and the Saxon-Hellfritsch team, the desert is a broad canvas for their wildest fantasies. The protagonist of this story is a scientist of sorts, but he wears the long beard of a hillbilly and the furrowed brow of a caveman or a Klingon. He’s a strange mix of the primitive and the cerebral, and his reason for his presence among these rocks and ridges is left unexplained. The scientist is supervising a team of workers, who are busily cranking a large infernal machine made of wood, rubber bladders, and steel; meanwhile, as cranks are turned and cushions are pounded, he measures and prods what looks to be a giant brain.

There’s another character in the video, too – a woman made entirely of stones. When the scientist’s team and their machine sinks in quicksand, it backfires and tears up his thumb. He lies prone on the dunes with his shirt undone, and the stone woman places rocks on his chest. They grow into a network of tubes and pipes, arcing up toward his face. Is her activity medicinal, or is it invasive? Later, he walks after her, but a cavity appears in a sand-pile as if it was blown there by wind, and she disappears into it. The desert closes around him, and the last we see of the scientist is his two legs, kicking out of a dune.

After capturing the basic footage in Death Valley, much of the intricate animation in the “Knife” clip was assembled in front of a green screen. The crazed machine, the quicksand pool, and the living stones were modeled in the studio, and rendered in a manner reminiscent of early sci-fi television programs like Land Of The Lost or Planet Of The Apes. The movement of the models is intentionally choppy; it’s trippy to watch the mechanisms in motion. But the clip’s most remarkable feature – the amazing color and feel of the desert landscape – doesn’t require augmentation of any sort.

Many thanks to Simon Halliday and our pals at Warp Records for hooking us up with this undeniably irresistible video! Warp has been kind enough to set us up with copies of the Grizzly Bear Yellow House discs that will be perfect for on-air giveaways, so feel free to give us a shout so we can set you up! If you need more info, call Andy Gesner at 732-613-1779 or e-mail us at info@HIPVideoPromo.com . You can also visit www.grizzly-bear.net to find out more about Grizzly Bear.