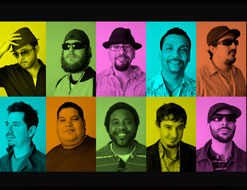 Hola programming amigos, it’s Andy Gesner and the HIP Video promo staff with a brand new clip from one of the most respected Latin artists in the country! The finest, funkiest, and most creative Latin orchestra to come out of the United States in the last decade, the Grammy nominated Grupo Fantasma is back with a video for “Montañozo” that is so vivid, it will make the rest of your day seem pale in comparison.

Their fresh and mind-altering track “Montañozo,” defined as mountain man in Spanish, is a Latin audiophile’s dreamscape, featuring all the right sounds in all the right places. Drawing heavily from the always welcome sound of brass, drums, tremolo guitars and a funky bass line, “Montañozo” is executed with the utmost precision that only the most masterful musicians can accomplish. Grupo Fantasma is a contrast to the usual contenders in the modern music world, focusing their efforts and talent on making music that is both classic and timeless.

The video really brings this track to life, playing out like a stylish Rodriguez film with its action packed story and cinematic marvels. Placing the viewer tracing the steps of a gorgeous vixen on the run from a group of some very thuggish characters, the clip doesn’t slow down for a moment, constantly playing with colors to keep the viewer entranced. Like every memorable short story, the video ends with a bang to keep everyone guessing what happens next. It’s takes a special sort of talent to be able to create something that any listener will enjoy, regardless of whether they are fans of the genre or not, and this clip is cooked up by those very sort of hands.

“Montañozo” is the first single off the group’s fifth record El Existential, which has already received much applaud form musicians and critics alike. “Grupo Fantasma is as tight as one would expect from a band that routinely backs up Prince” exclaims LA Weekly and The Washington Post affirms that “the ten members represent a new generation of latin music.” Their last effort, the Grammy nominated Sonidos Gold (2008), has trademarked the ensemble’s innovative sound and scored a cover feature in Pollstar Magazine, radio spots on NPR’s “Day to Day” and PRI’s “The World”, top ten status for several months on the CMJ radio charts and extensive press coverage throughout North America and Europe. After catching Fantasma at the 3rd annual Fun Fun Fun Fest in their hometown of Austin, Texas, Dead Milkmen frontman noted that “You haven’t lived until you’ve seen these guys come out of a Tex-Mex drum solo into Led Zeppelin’s Moby Dick.” Highlights from the past few years include the New Orleans Jazz Festival, Bonnaroo, Jelly NYC Pool Party, Montreal Jazz Festival, North Sea Jazz Festival in the Netherlands. The band has also performed with Prince at Coachella, London’s 02 Arena and the “Tonight Show with Jay Leno” and many other of his engagements, as well as recently backing the indie rock legends Spoon.

Take a look and listen; it won’t take long to realize why Grupo Fantasma is a Grammy nominee in the “Best Latin Rock, Alternative or Urban” category. Big thanks to the folks at Nat Geo Music for hooking us up with plenty of copies of El Existential to suffice all of your giveaway needs. If you need more info, call Andy Gesner at 732-613-1779 or e-mail us atinfo@HIPVideoPromo.com . You can also visit www.GrupoFantasma.com to find out more about Grupo Fantasma.