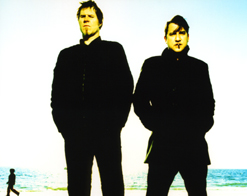 Hello esteemed programming friends! It’s Andy Gesner and the staff from HIP Video Promo bringing you a hot new clip. The sun is roaring here in the Northeast – summer season has begun, and that means lots of teenage kids have plenty of time on their hands. Some will do productive things with their vacations; most, in time-honored summer holiday tradition, will get their kicks in an unauthorized fashion. Greg Dulli and Mark Lanegan – known together as The Gutter Twins – identify with the mischief-makers. They’ve given us a new clip that is a pyromaniac’s wet dream: a chronicle of typical suburban boys killing time with some not-so-typical homemade explosives. The “Idle Hands” video is incendiary alright, and if you’ve got any taste at all for playing with fire (and who doesn’t?), you won’t be able to look away.

But hellfire comes naturally to The Gutter Twins. The pair’s dark, brooding, endlessly fascinating indie rock may not be the sound of the devil at work, but it’s probably the closest thing to it you’ll hear on earth. Saturnalia has been haunting the indie rock underground since its release, and publications have raced to name it one of the best albums of the year. “The Twins push each other to go darker and deeper, to bare more of their souls,” reports Stephen Deusner in his rave Pitchfork review, “so Saturnalia sounds heavier, bleaker, simultaneously more desperate and more content than anything either musician has done”. The NME likened single “Idle Hands” to “the sound of Tinariwen and U2 playing a black mass”, and callsSaturnalia proof that the devil really does have all the best tunes.

With its distorted guitar riffs and its menacing vocal performances by Lanegan and Dulli, “Idle Hands” already feels like the soundtrack to a day of misdeeds; video director Warren Julius’s examination of the exploits of a gang of amateur demolition artists is the perfect accompaniment. The four kids in the “Idle Hands” clip don’t look like badasses at all – in fact, they’re boys next door, bored youth with dreams of fire and time to kill. We follow them to a desolate dirt-heap on the edge of a city; it could be your town or mine, what matters is that it’s out of the reach or interest of any authorities.

They start out innocently enough: shattering lightbulbs with golf clubs, sending bicycles flying over hills and jumping after them, and taping stuffed animals to firecrackers and homemade model rockets. But soon it becomes apparent that a staggering amount of thought, planning, and effort has gone into their pranks – they crash through a constructed wall with a man sized dummy, and later watch as the dummy is blown into death-throe animation by their fireworks. Soon, they are detonating microwave ovens, flinging Molotov cocktails at nearby targets, and lobbing fireballs at explosives; once they pull out a gigantic flamethrower, the post-industrial scene becomes an inferno of post-adolescent mischief. It all looks incredibly dangerous; in fact, one of the boys’ shoes briefly catches fire. Julius cuts briskly away from that mishap – we’re meant to register the power of the flames, and then continue to watch in fascination. Slo-mo footage and fast-paced editing heightens the drama, the sense of impending trouble, and the feeling of time and energy misspent.

We’d like to thank Sub Pop for once again bringing us the best of the best! If you need more info, call Andy Gesner at 732-613-1779 or e-mail us atinfo@HIPVideoPromo.com. The band will be touring the US in July so let us know if you’d like to catch up with them when they are in your town. Or if you’d like to get your hands on some copies of Saturnalia, drop us a line! You can also visit www.Subpop.com, or www.TheGutterTwins.com to find out more about The Gutter Twins.

For info about The Gutter Twins’ “All Misery/Flowers” video, click HERE