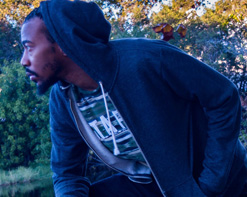 To make a big statement, one needs a big platform. What’s the greatest platform in music history? Radio. And what’s the most efficient way to get your music played on the radio? By force, of course! From Brooklyn, parts of New Jersey, all the way to Florida, next generation hip-hop artist, GV is getting radio play whether you like it or not in his cinematic new music video for “Lil Min”.

After his earlier singles, “Exhale” and “Another Hit” knocked music fans off their feet with a one-two punch, he provided fans with a profound, self-actualized confessional detailing social issues and the day-to-day life of a starving artist in the form of “Tunnelz.” Since the release of “Tunnelz,” GV’s career has been a lit wick, each day another inch closer to the stick of dynamite just waiting to detonate in a seismic explosion so large it may just change Hip Hop as we know it.

“GV”, meaning, “God’s Voice,” each line he spits impacts the soul with such ferocity, it’s impossible to ignore the Brooklyn-native’s wit and delivery. His new single “Lil Min” tells the story of a frustrated artist, grinding for years on end in a thankless cycle with no end. There is nothing on the artist’s mind but getting out of the vicious cycle…So much so that he decides to take fate into his own hands. The official music video, created with the help of long-time collaborators, A1 Vision Productions, gives this story a visual dimension. GV and his crew load up in the car, drive over to the radio station, bust right in and put their own music into the system. In and out like clockwork, the crew is fast…but not fast enough.

We’re profoundly thrilled to share the frustration of an artist with so much to say, on the brink of a major breakthrough’ and instantly likable like GV to bring you the “Lil Min” music video. It’s our sincere hope that you and your viewers will flock to “Lil Min”, share it on your socials, and add it to your programming in a timely fashion. Rest assured we will have plenty of outstanding merch from GV to set up online/on-air contests and giveaways throughout the campaign. Don’t hesitate to let us know what we can do on our end to have you hop aboard the GV bandwagon. Please contact Andy Gesner and the HIP Video Promo team at (732)-613-1779, email us at info@HIPVideoPromo.com for more info on GV.

For info about other GV music videos, click HERE