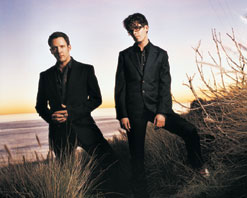 A big hello to all of my esteemed music video programmer friends! It’s Andy Gesner and the staff from HIP Video Promo with another excellent video. We’re thrilled to be working with MCA Nashville to bring you the latest clip from two of the freshest faces on their roster: Jaime Hanna and Jonathan McEuen. If that combination of surnames sounds familiar to you, there’s a reason – the two musicians’ fathers have played together in the Nitty Gritty Dirt Band for close to forty years. In 1972, the Dirt Band’s landmark Will The Circle Be Unbroken was arguably the first album to be embraced equally by fans of country music and mainstream rock and roll. The more things change, the more they stay the same: more than a quarter of a century later, the sons of the Dirt Band’s leaders have made an eponymous record that sounds equally at home on Nashville’s contemporary stations and on mainstream hit radio. There is no dissonance whatsoever between the pedal steel and traditional orchestration and the radiant pop production. This is music that evokes the Tennessee mountains and the California surf – and all the wide-open spaces in between.

Hanna-McEuen is not an alt-country act. While the two principles have deep roots in bluegrass, there’s nothing murky or mysterious about their debut. Instead, their brand of Americana is bright, tuneful, sometimes fun and optimistic, but often suffused with longing and ache. Amazon.com has described the pair as a combination of “..the balladry of the Eagles, the romantic ache of Bruce Springsteen, the sing-song purity of Buddy Holly, and the buoyancy of the Everly Brothers.” It’s telling that the duo’s first exposure to a mass audience was through a cover of Gary Scruggs’s “Lowlands”, recorded in 2001 for Will The Circle Be Unbroken, Vol 3. Hanna and McEuen coaxed all of the dread and uncertainty out of the lyric, and made their version of the bluegrass gem a standout cut on the Dirt Band’s third edition of their landmark series. Without sacrificing any of the authenticity or intensity of the original, the duo made their bluegrass and country feel utterly hip and contemporary.

It’s a trick they’re able to pull off over and over again on Hanna-McEuen. Each of the twelve cuts looks backward and forward in equal measure, drawing from the California country-rock legacy, fifties vocal groups and sixties folk-soul, eighties revivalists like Steve Earle and Dwight Yoakam, and finest work of current singer-songwriters. Unlike many stalking this territory, Jaime Hanna and Jonathan McEuen do not feel that it’s necessary to blur or muddy the production to replicate the crackly, distorted tone of vintage records. Instead, they’ve boldly made one of the best-sounding albums of 2005. On “Ocean”, the rhythm section, the piano and the guitar shimmer with astonishing vibrancy. But their beautifully-recorded tight harmonies are their sonic hallmark. Like the Everly Brothers – the act to which Hanna-McEuen (and possibly everybody else involved in contemporary American music) owes the most – they often sound like twin expressions of a single will.

On this clip for the song “Ocean”, video director Keith Malloy has done a terrific job capturing the Hanna-McEuen aesthetic. As the two musicians sing longingly about watching girls on the beach, he gives us shot after slo-mo shot of two gorgeous women riding waves. There’s nothing trashy or exploitative about it at all: the two women are powerful, athletic, and its impossible not to admire them. As they laugh and splash their way through the sun and surf, you can almost hear Jaime Hanna’s and Jonathan McEuen’s heartstrings stretching to the breaking point.

Here at HIP we are excited to be teaming up with our friend Tom Lord in Nashville to bring you this radiant and alluring clip! We will have plenty of copies of Hanna-McEuen for on-air giveaways, along with t-shirts, and insulated koozies for your favorite beverages! If you need more info call Andy Gesner at 732-613-1779, or email info@HIPVideoPromo.com . You can also visit www.UMGNashville.com to find out more about Hanna-McEuen.