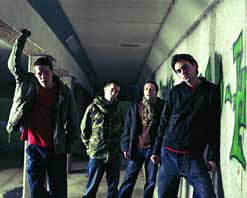 Hey, everybody! It’s Andy Gesner and the staff from HIP Video Promo back with another terrific new video from our friends across the Atlantic. Hard-Fi’s rapid rise to the upper reaches of the UK charts didn’t catch anybody in England by surprise: their debut singles, propulsive, catchy and undeniable as they were, seemed to portend wild success for the Staines quartet. But we believe that Hard-Fi is uniquely positioned to duplicate their meteoric ascent here on this side of the pond. It’s not that their music doesn’t sound British (because it does, and in the best tradition of pub-swigging, late-night partying London rock and roll). It’s that Hard-Fi effortlessly achieves the effect that almost all hip bands are going for these days – a gutbusting fusion of Eighties new wave, Nineties Britpop, and contemporary alternative music. Throw in the fact that they rock so much harder than their peers, and their advantages start to seem almost unfair.

But let’s start with the most important part – Hard-Fi makes dance music that you can actually dance to. Their music nods to Duran Duran and the rest of the New Romantics, but also incorporates elements from disco, techno, and European big-beat. “Cash Machine”, the lead single from Stars Of CCTV, managed to soar like early Oasis, sweep like a Morricone soundtrack, and shake like a night out at a Midlands rave. The track reached #14 on the British charts (it reached #15 on the U.S. Modern Rock charts, too), and helped escort the album to the #1 position in January ’06. As Hard-Fi mania swept aside all U.K. competition, Stars Of CCTV went double-platinum and received a Mercury Prize nomination.

“Hard To Beat”, the second American single, was the song that made Hard-Fi famous – the band’s first British top-ten hit, and their best claim to rulership of the great international dance floor. Over a gigantic synth riff and an insistent backbeat, singer Richard Archer spills a story of desire and sexual energy, and submission to the rhythms of the streets. “Hard To Beat” is a tough, two-fisted single: anthemic, frenzied, insistent, immediately recognizable as a classic. It’s sort of song that carries with it a promise of the summer to come – a pledge of wild magic and strange chemistry, and warm endless nights of lust and mystery.

Hard-Fi represents ex-urban London: not the gleaming office buildings, landmarks, and nightclubs of the City, but the charmless tower blocks and venerable public houses of the outer ring of suburban development. The band has gotten great emotional mileage from the dissonance between the youthful and restless energy of the characters on Stars Of CCTV and their staid, slightly stale surroundings, and the clip for “Hard To Beat” returns to this theme. The video is set in a handsome but unmistakably traditional British pub; we watch the kids flirt and drink, and shoot pool, but it seems impossible that the walls could contain their desire and longing. Hard-Fi plays in the corner of the bar, not on a stage – they’re more the animated spirits of the room than the house band. By the last chorus, the scene has shifted: now we’re at a crowded rave, radiant and near-mystic in glo-stick light. Surrounded by people and echoed by his frenetic friends, Archer jumps toward the camera, sending his prayer up to the ceiling.

We are all so pleased to be working once again with Hard-Fi and Atlantic to bring you such a spectacular video. We will have plenty of Hard-Fi stickers and pins along with copies of Stars of CCTV available for on air giveaways and contests. Hard-Fi will be back in the states on tour later this spring so if you would like to set up an interview or ID, don’t hesitate to let us know. If you need more info, call Andy Gesner at 732-613-1779 or e-mail us at info@HIPVideoPromo.com . You can also visit www.AtlanticRecords.com to find out more about Hard-Fi.