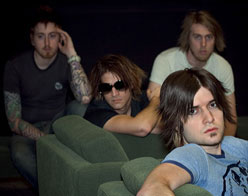 Hello everyone! It’s Andy Gesner and the staff at HIP Video Promo, hoping you had a terrific Labor Day weekend, and that you’re rested and ready for the busiest time of the year for indie bands and their supporters. To those on the outside of the industry, the life of a touring rock musician seems like it’s a non-stop party: all excitement, stimulation, and fun sans responsibility. Those of us who are involved in this enterprise on a day-to-day basis know better. The road is lonely, playing show after show is a grind that takes a physical toll on musicians, and home can begin to seem a distant memory.

For the past year, Harsh Krieger, an emerging band from Nashville, has been doing what emerging bands do: rocking across the country, playing stages and impressing audiences wherever they can. Success depends upon a combination of talent and persistence, and Harsh Krieger have shown they’ve got reserves of both. The upstarts have landed their debut single on close to three hundred college radio playlists, and have placed four different songs on The Real World and two on Road Rules. And while their songs have been spinning, the group has been touring relentlessly, playing shows with the likes of Luna Halo, Tegan & Sara, and Cake, and never letting audiences see them falter.

So the video for “Home”, the soaring lead track from Harsh Krieger, is a bit of a confessional piece as well as a phantasmagoric showcase. Here, as the long meditative stretches in the tour bus bleed into a fantastic reverie, the band shows us their homesickness and their ache for familiar places. The Music City has a special significance for singer Jake Harsh and lead guitarist Jesse Krieger – they met there at the Nashville School Of Audio Engineering, grew up there, put the band together there, and return there to the legendary Exit/In for their biggest shows. Their national aspirations are evident from their huge, radio-ready rock sound, but their hearts belong to Tennessee.

The expressive clip for Harsh Krieger’s “Home” communicates both the loneliness of the road and the exhilaration of live performance. Director Kaan Akalin is no stranger to faraway places – he’s best known for his illuminating, quietly meditative documentary chronicling his experiences in Istanbul. As a video director, he has already developed a distinctive style, manipulating and illustrating the world that surrounds the musicians, and painting on the computer-generated backdrops with squiggles of electric light.

The “Home” clip opens on a chartered tour bus. But this isn’t a Journey video, and Akalin’s sensibilities are non-naturalist: the vehicle runs on an endless road in a wall-diorama. We see it first through a keyhole, as if we’re entering a museum; and as the camera slowly creeps up to the model bus, we catch the faces of the members of Harsh Krieger peering longingly out of the windows. From there, it’s a wild ride through the imaginations of the daydreaming bandmembers: long sci-fi corridors filled with light designs and flocks of streaming hand-drawn black birds, tall buildings, floating geometric shapes. Hula hoops of illumination rise from the beds of snowy mountain valleys, circling trees and dissipating in the skies above. From time to time, the bandmembers become blurry and transparent – as if they’re losing their sense of themselves amidst the constant stimulation. They become outlined in their own electricity and disappear briefly before blinking back on. In one astonishing sequence, an entire audience is captivated thus – before falling forward like flimsy cardboard cut-outs.

Here at HIP we are stoked to be working with Georgia McBride and W3G Entertainment Group to bring you this compelling emerging band. We have plenty of copies of Harsh Krieger CDs and other Harsh Krieger goodies for on-air giveaways. The band is currently on tour, and would love to set up video interviews or IDs with you! Please check and see if they are coming through your area since this is a band that you must see live! If you need more info, call Andy Gesner at 732-613-1779 or e-mail us at info@HIPVideoPromo.com .