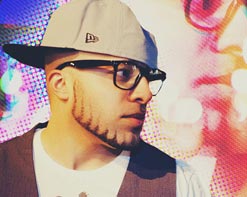 This New York City songwriter, recording artist, producer, DJ and actor has worked and collaborated with well-known artists of today, including Pitbull, T-Pain, Sean Kingston, Chingy, Trey Songz, Beenie Man, and countless more. His latest project “The #DUMBSTUPIDCRAZY Mixtape” with Pitbull has had 412,781 Downloads to date. Fueled by drive and determination, HB MONTE is climbing his way to the top, increasing his stardom on his own creative level.

HB MONTE has been making music since 2002, when he first emerged on the scene with Ludacris during a radio station event in Boston. His African, European, and Latin background is what exposed him to various genres of music. His innovative style is infectious, and the raw energy and rhythmic flow of his music captivates audiences from all over the world.

S.T.R.E.A.M. Music Group presents his most recent endeavor, “Dumb, Stupid, Crazy.” Producer Big Dawg takes us on an entertaining ride with scenes of comedic relief and downright laughter. Filmed and edited by Dan Newman, this contagiously energetic clip was filmed in one day in random locations! Speaking of random, every reaction from passerby is spur-of-the-moment, and nothing is scripted, which just adds to the sincerity of the message. “Dumb, Stupid, Crazy” is an infectious tune, and the video is an uproariously engaging accompaniment.

This electro hip-hop/pop and soul artist is on the rise, and you don’t want to miss what he has next in store! For more information on HB MONTE and his exciting new clip “Dumb, Stupid, Crazy,” please contact Andy Gesner and the HIP Video Promo staff at (732)-613-1779 or email us at info@HIPVideoPromo.com .