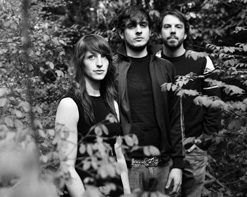 Greetings fellow music video stalwarts! It’s Andy Gesner and the staff from HIP Video Promo, back with another offbeat and wonderful video from an irresistible independent act. Headlights sounds straight out of the UK: gorgeous, sweeping indie-pop inspired, perhaps, by some cinematic, rain-soaked Glaswegian twilight. The opening of their video clip seems to seal it – a wan-looking indie kid opening a farmhouse door onto a wide, rain-washed heath. But these aren’t the highlands we’re staring at, it’s green Middle America. Headlights hail from Champaign, Illinois – a city with a long indie tradition of its own – and their cosmopolitan sound aligns them with the best dream-pop and indie-pop worldwide. And while the comparisons to My Bloody Valentine and Heavenly are certainly warranted, their debut album also includes a brief number called “The Midwest Is The Best” that segues into a legit FM-radio rocker. (And they mean every word of it!)

It’s that sort of flexibility that has announced Headlights as a major new pop band: architects of romantic dreamscapes; an American heartland version of Camera Obscura. They’re handy with analog synthesizer, gossamer-silky backing vocals, and occasional electronic textures and string samples. The trio crams the inspired arrangements on Kill Them With Kindness with radiant acoustic guitar, vintage organ, explosive drum-fills and butter-smooth bass guitar; their songwriting, too, is infectious and often heartbreakingly frank. But the core of Headlights is the interplay between the voices of Tristan Wraight and Erin Fein. Some voices – like Kevin Shields and Bilinda Butcher, or Archie Moore and Sarah Shannon of Velocity Girl – were simply meant to go together, and Wraight and Fein sing like a matched pair of earth angels.

Their voices join on “TV”, the lead single from Kill Them With Kindness, and generate a breathless sugar-rush – be sure you’re sitting down for the chorus, because you just might inadvertently swoon. But bite into the cotton candy carefully: there are barbs in there. “TV” is a pop song for sure, but it’s also an articulate cultural critique, and a shot at the “liars and the killers” who dominate the airwaves. This is the sound of disengagement, bewilderment and distress, and though the band makes it all sound ravishing, it’s also undeniably affecting.

Indie production team J-Four specializes in capturing the fevered visions and longings of wistful indiepoppers on video: their radiant performance clip for “Rainbows” by Tilly And The Wall, for instance, is almost unbearably fetching. Everything they shoot features the worried-yet-adorable faces of sweet indiepop kids, and the “TV” clip is no exception. The directors have the tweepop algebra down cold – late-autumn skies, scarves, stars, sneakers and sweaters, and raindrops on bicycle fenders and fluttering eyelashes. The trio spends most of the clip acting like kids: they’re all together on one beat-up old ten-speeder, Wraight pedaling, Fein on the handlebars, and multi-instrumentalist Brett Sanderson, arms outstretched, in the basket over the back wheel. They cruise along the deserted streets of Champaign and the country roads that surround it, passing gorgeous, dilapidated brick buildings and streaking through alleys and under bridges. A group of friends has lined up on the curbside; J-Four shoots them through a purple and white filter that renders them cartoonish. They sing along with “TV”, and as they do, block letters float out of their mouths and drift to the corners of the frames. Finally, Headlights reaches the crowd, and everybody watches as Erin Fein’s greeting floats up to the sky, above the bare trees.

We’re proud to be working again with Polyvinyl’s Matt Lunsford and Seth Hubbard, the same friends who’ve brought so many great clips to the music video landscape, such as all of the of Montreal videos you’ve received over the past two years! If you’d like to set up an on-air giveaway or contest featuring Headlights, please be in touch, because we’ve got lots of copies of their album Kill Them With Kindness on hand, and we’d love to set you up! If you need more info, call Andy Gesner at 732-613-1779 or e-mail us at info@HIPVideoPromo.com. You can also visit www.HeadlightsMusic.com orwww.PolyvinylRecords.com to find out more about Headlights.