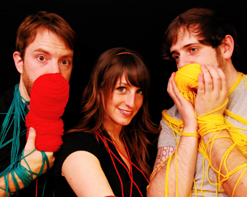 Hello my fellow indie rock lovers! It’s Andy Gesner and the staff from HIP Video Promo, and we’re thrilled to be able to share another charming indie video with you. Here at HIP, we spent much of 2007 spinning (and singing along with) Kill Them With Kindness, the dazzling debut album by Headlights. “TV”, the single from that set, was one of the most undeniable indiepop confections we’d come across in years; months after sending that video to you, we still can’t get its sugar-rush chorus out of our heads. The rest of Kindnessfollowed suit: gossamer harmonies, sweet, breathy vocal performances from singers Erin Fein and Tristan Wraight, and clever arrangements that drew from classic pop, contemporary indie, vintage trip-hop and synthpunk, and IDM. And as musically sophisticated as Headlights were, their lyrics were every bit as inspired – subtle, smart, impressionistic, impassioned, and culturally aware. They weren’t always pointed, but when they were – as on “TV” – their cutting-edges stung.

Thus we greet the release of Some Racing, Some Stopping with the fervor of true enthusiasts. “Cherry Tulips”, the lead single, offers more of everything we’ve always loved about Headlights, and adds entirely new dimensions to the group’s sound. Some Racing was written and recorded in a farmhouse on the outskirts of the band’s native Champaign, Illinois, and the remove from the city has imparted a direct, organic feel to their music. Together with multi-instrumentalist and producer Brett Sanderson, Fein and Wright have broadened their sonic palettes, dispensed with some of the atmospherics, and sharpened their collective focus. Now there’s absolutely no way to miss the superb songcraft that animates the Headlights project. Erin Fein, in particular, seems at home with this refined approach – her vocal on “Cherry Tulips” is relaxed, inviting, and honey-warm.

The clip for “Cherry Tulips” perfectly captures that mystic-farmhouse vibe – and the magic that can happen when a talented band decides to live, work, and write together. Director Julian Acosta has worked with Headlights before; it was his radiant and softly-beautiful clip for “TV” that introduced the band to much of the indie underground. His latest collaboration with the group is, if possible, even sweeter than his last. He presents Headlights as a band of friends, comfortable with each other and with their music, conjuring sonic spells under soft country light.

The “Cherry Tulips” clip opens with a shot of Erin Fein in bed; she sleeps next to an antique lamp under farmhouse windows. It’s not morning yet, but she wakes anyway – she steps into the light, and looks knowingly at the camera. Then, as if seized by some invisible hand, she levitates and slips effortlessly into shoes: her nightie falls away, revealing a gold-spangled dress. Eyes fixed on the lens, she dances her way over to the band, who’ve gathered under the high ceilings to perform “Cherry Tulips”. The group uses simple folk instruments: an accordion, an acoustic guitar, brushed drums, percussion. Even Fein’s synthesizer is a primitive Casio. Together, the band generates spectral forces of their own – flowers hang suspended in the air around them, the wooden chairs they sit on are reassembled into improbable pyramids, and the farmhouse is flooded with hot spotlights. They’ve gone to the country, but they’ve taken the stage with them; wherever they are, they’re indiepop stars.

Big thanks to Seth Hubbard and Matt Lunsford at Polyvinyl for once again bringing us on board to be a part of their music video promotional efforts. They’ve set us up with lots of copies of Some Racing, Some Stopping for your on air giveaway needs, so drop us a line! The band will also be touring the country from mid-February through the beginning to be sure to be in touch about setting a video interview when they come to your market! If you need more info call Andy Gesner at 732-613-1779, or email info@HIPVideoPromo.com. You can also visit www.polyvinylrecords.com, or www.HeadlightsMusic.com to find out more about Headlights.