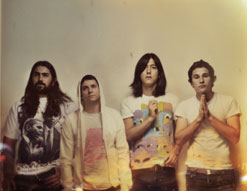 Greetings cherished programmers! It’s Andy Gesner and the staff from HIP Video Promo, here to spread the word about an arresting new clip from an inventive Los Angeles combo. Trent Reznor doesn’t just allow anybody to open for Nine Inch Nails; for years, he’s handed the support slot to up-and-coming groups that share some of the adventurous musical sensibilities of his own heralded act. So nobody in Southern California was surprised at all when HEALTH was selected to support NIN during their two most recent West Coast swings. HEALTH’s raw analog synthesizer attack, characteristic electro-futurist sound, artful deadpan vocals, and wild and near-tribal beats have made the quartet one of the hottest experimental band in America, and a natural pair with the world’s most visionary industrial rockers. And after they’re done with the Nine Inch Nails shows, HEALTH continues on: across America on its hippest stages, and then to Europe and beyond.

Such is the demand for Get Color, one of the fall’s most hotly-anticipated releases. In America, HEALTH is the talk of the weblogs; in England, where the act’s split seven inch with Crystal Castles reached #9 on the indie charts last year, they’re already underground stars. “Die Slow”, the group’s latest single, ought to stoke the hysteria further: it’s three minutes of hammering drumbeats, gorgeous ‘verbed-out vocals, and a repeating, stuttering, elastic synthesizer riff that’s both insidious and weirdly stimulating. It can be hard to decipher what Jake Duzsik is singing about, but that’s part of the point – his vocals feel obscured, imperiled, constantly at risk of being swallowed, and that’s exactly the effect that HEALTH has on listeners. If this year has been all about psych-rock and dizzy, noisy, destabilized electro, no song epitomizes 2009 better than “Die Slow”.

Duzsik and his bandmates are oddly impassive in the gorgeous and artfully-constructed clip for “Die Slow”, too – especially considering the mayhem going on around them. At first, it seems that HEALTH is playing a typical (if slightly unhinged) underground/indie party: the crowd consists of beautiful young people who dance with wild abandon to the song, bumping their bodies as they do. But there’s something strange about the festivities, too – something that strikes the viewer as potentially dangerous. The show appears to be taking place in a fashionably-appointed private temple; it’s ornate and exotic, and not at all the kind of place you’d expect to see a rock show. And then there are the dancers who aren’t in the crowd: attractive but unsmiling women who move to the music with military precision. The mosh pit gets wilder and wilder, and the movements begin to resemble a violent mass-trance. It all comes apart in a shocking climax that needs to be watched to be believed: one that reveals the terrifying purpose of this gathering.

HEALTH uses clever techniques to augment the creeping feeling of threat and insecurity. At the beginning of the clip, images flash by at a breakneck pace, each one in time with the frenetic synthesizer. Many of them are shots of partygoers having a good time, but a few are more disturbing than that: faces frozen in astonished expressions, and even a few that look bloodied. They’re only on the screen for a split second, but they leave an indelible impression of weirdness. Later, during the video’s pivotal scene, HEALTH divides the action into a series of contained rectangles, each one surrounded by the next like Russian nesting dolls. The images seem to float and blur – and this amplifies the madness of the action taking place inside the central box!

HIP and Lovepump United Records are proud to bring you the wildly creative “Die Slow” video! If you need more info, call Andy Gesner at 732-613-1779 or e-mail us at info@HIPVideoPromo.com.