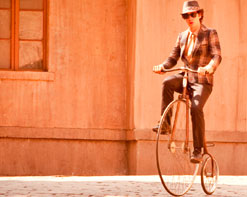 Salutations! It’s Andy Gesner and the staff from HIP Video Promo here, introducing a fun and funky clip from a new solo act in town! Over the past five years, a strong, devoted cult following developed around the solid indie rock of The Ruse, a band highly influenced by the soaring epic sounds of U2. While Ruse drummer Jason Young incorporates these elements in his solo project, dubbed Heartour, he introduces new elements as well that are truly exciting—a finger-tapping, free-flying, spirited feeling that is the pulse of his most recent album, Ate. That feeling is especially prevalent in both the song and clip of “Showgirl & The Clown.” A feverish, accordion-driven dance-rock number, the song radiates energy, filled with clever, infectious hooks. For a dozen people in the video, the song is irresistible enough to start dancing in the middle of the street!

The video was filmed on a sunny day, in what looks like a typical European city center, streets laid with cobblestones and filled with picturesque restaurants, cafes and residences. At first, the city folk are minding their own business, eating out, chatting with friends, going about their day-to-day lives. But when a man in dark sunglasses—Jason Young–rides into the center on a bike, crashes and falls to the ground, that all changes. Everyone, shocked, walks over, presumably to see if he needs help. He lies on the ground, not moving; until he starts to sing. Once he starts singing, everyone is overcome with an insistent urge to start dancing. Even a nun, who crossed herself when she witnessed the accident, joins in too. The dance is synchronized, which imbues the video with a joyful, exuberant, Broadway play-like quality. The video periodically cuts to another scene; Young singing into a microphone filled with rainbow light. Behind him, people dance wildly in the dark, in what looks like a nightclub.

Dance-ready rhythms, not only in “Showgirl & The Clown,” but also running throughout the entire Ate record, makes for an exciting and entertaining experience. The sounds Young utilizes are also original and fresh—unique electronic flourishes, accordions, guitars distorted in unconventional ways. Young himself said he was very excited when this record was finished; as he felt he achieved maturity on this record. Indeed it’s a perfect balance between originality and delicious pop hooks. This clip is an example of his overall sound, a fresh take on pop that’s genre-bending and gratifying.

We are thrilled to work with Jason Young at Heartour Records, bringing you a delightfully engaging clip for your upcoming programming. If you need more info, call Andy Gesner at 732-613-1779 or e-mail us at info@HIPVideoPromo.com. You can also visit www.Heartour.com to find out more about Heartour.