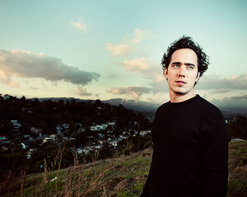 Go go gadget awesome! It’s Andy Gesner and the HIP Video crew, here to bring you a new video from quirky indie rocker Heartour. If the name sounds familiar, it’s because some of you might have heard of this cool solo artist when we sent you his funky video for “Showgirl & The Clown,” which was shot at Universal Studios by director Chuchie Hill (known for her edgy commercial work including Calvin Klien, Heinz, Got Milk, and Skype). Now Heartour returns with a new record and an intricate steampunk-themed video for “Yaaay!” that is guaranteed to turn your gears.

Heartour is Jason Young, the drummer of LA indie rock band The Ruse, who have built a solid following across the nation through heavy touring. In 2009, the band even achieved a spot on Billboard’s Heatseekers chart when one of their songs was picked by iTunes to be the “Single of the Week.” When he’s not busy hitting the daylights out of his snare, Young plays just about every other instrument out there as his alter ego, Heartour. With several albums in the history of the project, Heartour’s progressive electronic sound has grown by leaps and bounds with each release. However, it was not until 2009’s Ate that he began to believe that he had something more than a pet project. The positive fan and critical feedback made it clear that the music he was making had a space in the marketplace. With renewed energy and shining ideas, Young is set to make his mark with Heartour’s fourth and current 2011 album, Submarine Sounds.

With the freedom and ability to produce, write and perform all instruments, Heartour decided to make a completely digital album. Taking full advantage of the litany of music technology on the market, he purposefully negated live instruments giving the album a heavily synthesized 1980’s sounding vibe. The sound defines the theme of the album so much so that it also influenced the album’s title. “It sort of has this underwater feel to it with all the reverbs and squishy tones,” exclaims Young. “Yaaay!” (directed by Matt Silverman) embodies this notion in sound and visual, alike. The song features numerous layers of synthesizers of all shapes and intensity set to a fun driving beat and samples of kids screaming “Yaaay!” The biggest moment of the track occurs in the breakdown, when the synth lifts off into Coldplay territory, creating a massive space in the mix that lets the song float away like a fleet of balloons into the atmosphere. The video portion completes the image with an ode to synchronized gadgetry and complex machinery. The whole clip takes place inside an old and massive apparatus that is laced with dusty gears, lights, belts, and buttons galore like some remnant of an ancient submarine, becoming active with the song. The machine is operated by a mysterious figure in a protective suit that has light bulbs for eyes, which turns out to be Young himself in the end. The attention to detail in this video is beyond words and it’s safe to say that any fan of the popular BioShock universe will feel right at home in this capsule.

We’re thrilled to be working with Heartour once again on this unique project. We’ve got copies of Submarine Sounds here for your listening pleasure, so please be in touch so we can hook you up! If you need more info, call Andy Gesner at 732-613-1779 or e-mail us at info@HIPVideoPromo.com. You can also visit www.Heartour.com to find out more about Heartour and any show dates near you.

For info about of Heartour’s “Showgirl & The Clown” video, click HERE